This is the time of year when your favorite games pick up decorations, snow, and the occasional jolly old elf.

GamesBeat asked publishers and developers for a rundown of some of the holiday-related material their games are giving to players this year, and they buried us in an avalanche of responses. With items like heartless holiday cash grabs, scary Santas, and bosses that have strangely adopted seasonal attire, it seems the entire industry is getting into the holiday spirit. 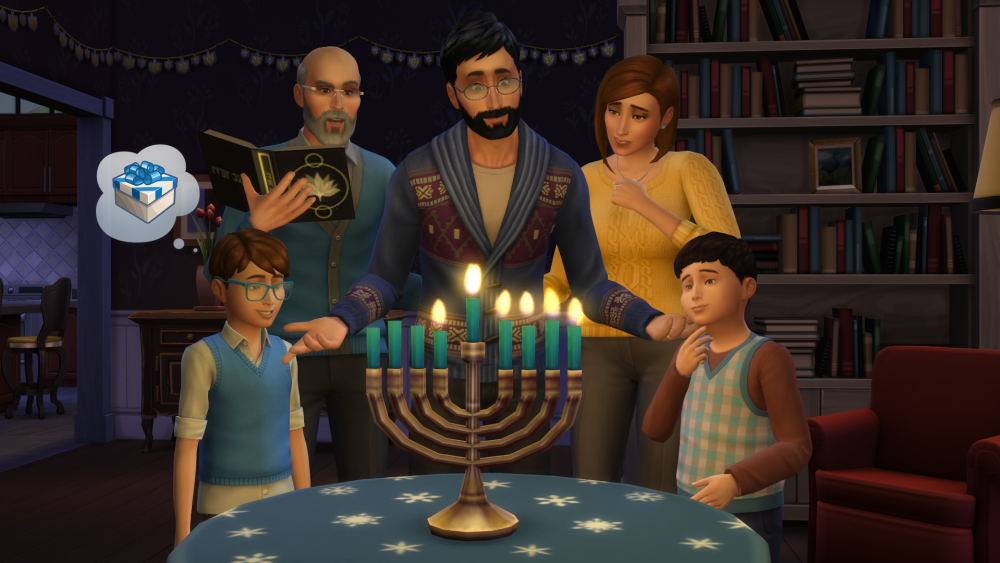 Above: The Sims 4 includes a number of holiday items, including ugly holiday sweaters for a variety of religions.

The Sims 4 gave its simulated-life-builder players the Holiday Celebration Pack this year, which has holiday-themed objects for their houses, decor, and clothing. Including, yes, those ugly holiday sweaters. 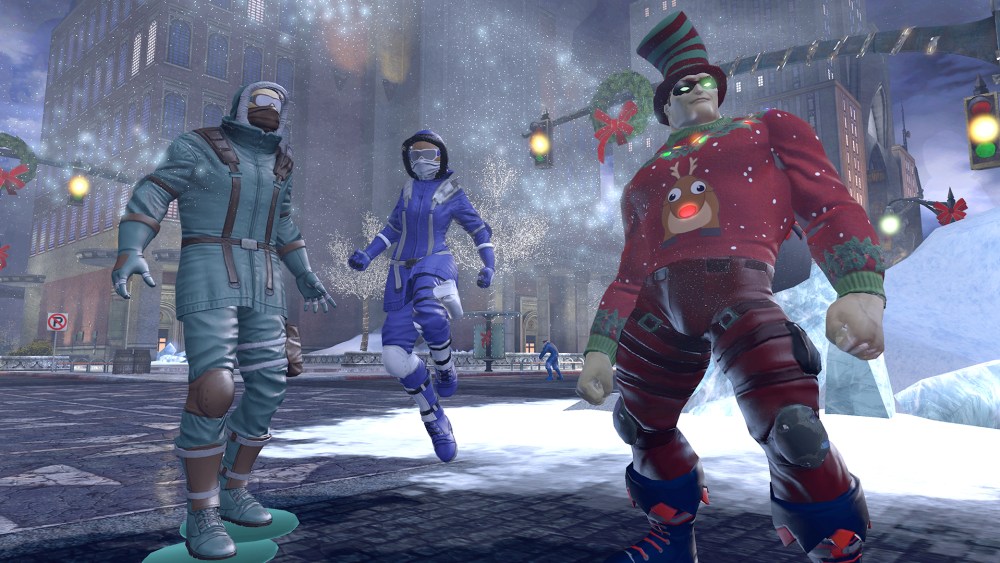 Above: That’s an ugly sweater. Guy it’s on ain’t no peach, either.

Not to be outdone, Sony Entertainment Online built ugly sweaters into the massively multiplayer hero RPG DC Universe Online — and even put them on snowmen players may attack in the MMO shooter PlanetSide 2 as part of the “Auraximas” celebration on Esamir. (Earn your “Snowblower” title today, folks.)

Bosses in the holiday spirit 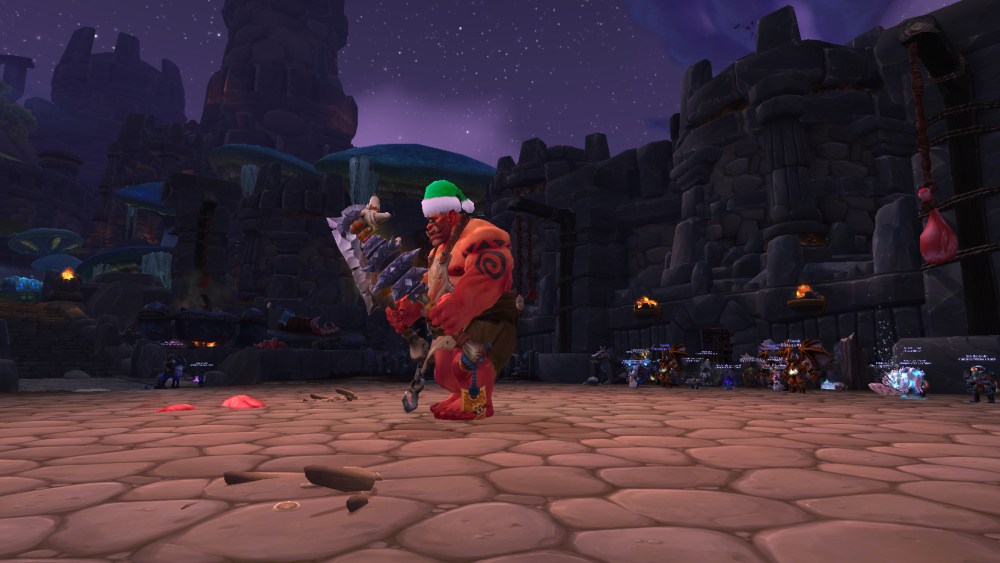 Above: The Butcher looks festive in his holiday cheer, preparing to host a party … wait, why do those guests in the background have axes and swords?

World of Warcraft offers a variety of holiday-themed quests, items, recipes and the like in its Feast of Winter Veil, but players’ favorites are always the bosses who suddenly don their holiday gear — which players can then collect after they’re dead. Wow, MMO folk are mean.

For even more-dramatic holiday costumes, Blizzard Entertainment also dressed up its Heroes of the Storm online battle arena game characters in Winter Veil costumes and offered players the chance to ride around on a festive Reign-Deer. The game’s in beta testing now.

Putting the green in red and green 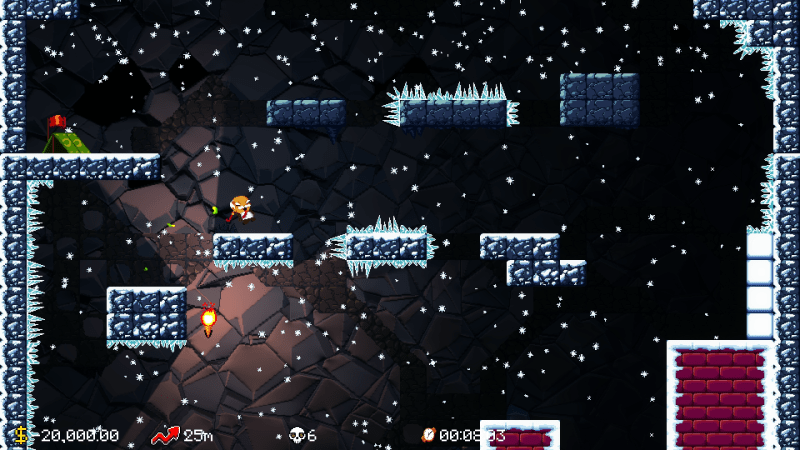 Above: Fork Parker does not endorse this holiday game, especially because you didn’t pay for it.

Devolver Digital’s fictional chief financial officer Fork Parker has long been a fixture in the company’s press releases, usually rubbing his hands together with glee over something he thinks will bring in cash by the bucketload.

Now he takes the gaming spotlight: Developer Dodge Roll, the company who made Enter the Gungeon, has turned him into a holiday-themed platformer game character in search of profit. We suspect Fork Parker’s Holiday Profit Hike is some kind of sick revenge plot — though whether it’s on Fork or on the holidays themselves is unclear.

“F— this noise,” the fake CFO said in a fake statement for a real Devolver press release. “Free is for Korean mobile games and after-dinner mints. This is an affront to everything I stand for and what I believe in.”

Holiday on the halfcourt 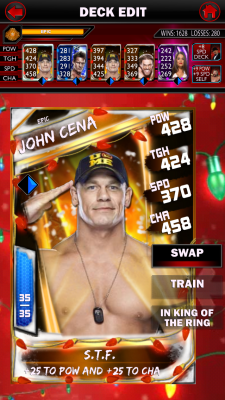 Above: Nothing like a yummy John Cena to go with your holidays. Card! I meant card!

The basketball game NBA 2K15 has downloadable Christmas Day NBA uniforms in game, including jerseys for every one of the 10 teams playing on December 25.

And 2K Games’ mobile card-based wrestling title, the WWE SuperCard app, has holiday-themed backgrounds on its cards and splash screens.

The Rift massively multiplayer RPG is heavy into the holidays this year, celebrating Fae Yule from now through Jan. 7. Grandfather Frost is missing (so get going to find him, jeez), there’s a whole pack of minions for the season, and tons of items to collect (including pets, Planar Essences, seasonal Dimension Items and Costume Weapons). 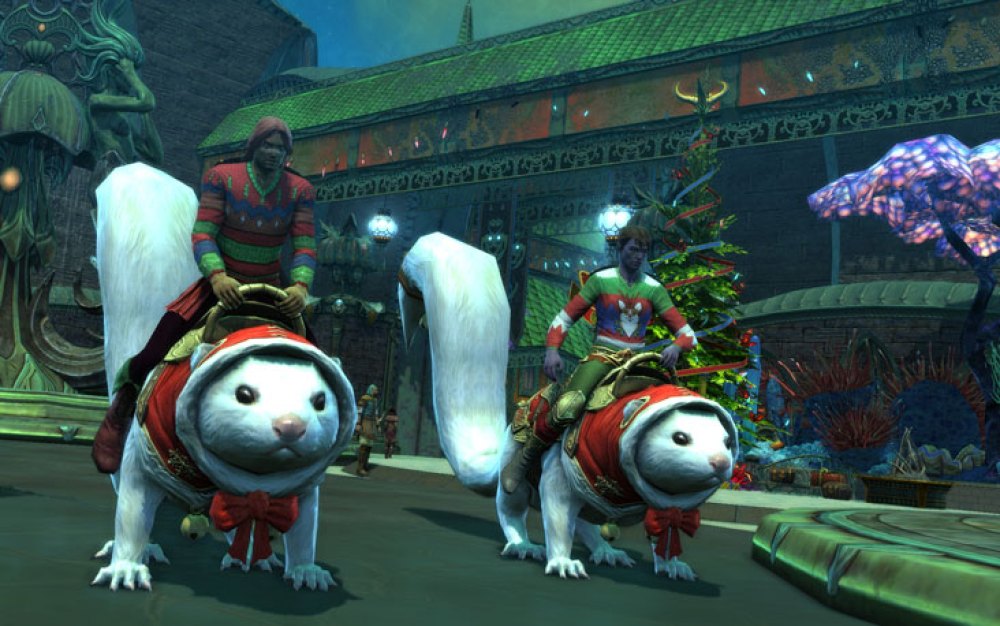 Above: Those are some ugly sweaters on mice in Rift. Okay, on minks. (With wee mice noses.)

Trion also kicked off the Winter Maiden Festival in the sandbox MMO ArcheAge, with holiday hats, snowmen, and trees to decorate; Snowfest in voxel RPG Trove, with mystery boxes of recipes, snowballs, and mounts that players can get from Adventure World enemies and high-level Shadow Arenas; and the Solstice in online shooter Defiance, which seems to have a lot more to do with killing than holiday decorations, but perhaps killing in an especially festive way with your fancy radiation-damage Radiant Solstice weapons.

Stop enough attacks by the dastardly Volge and you’ll be invited to collect yourself some gifts at Shondu’s Consolate. Pick up five of those gifts and you’ll receive a present with twelve legendary weapons with names like Partridge, Turtle Dove, French Hen, Calling Bird, Golden Ring, Laying Goose…