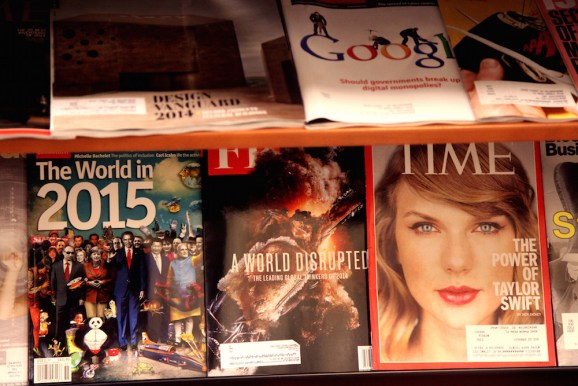 You can probably already get your favorite magazine in digital format, but until now it probably didn’t use your tablet or smartphone’s hardware. But digital magazine startup Magzter hopes to change that today with the launch of its new MagEnhance tool set.

Magzter makes it really easy for publishers to translate their print magazines into digital versions. It has over 1,500 major publishers using its service to produce more than 4,000 magazines available via Apple’s Newsstand, the Kindle Store, and the Magzter digital magazine store. Previously, publishers found Magzter to be an attractive partner because it was very cost effective to push preexisting magazine issues to new untapped digital distribution channels. However, that also meant that there wouldn’t be very many bells and whistles.

The new MagEnhance tools will change that by allowing those publishers to quickly and easily enhance sections within those magazine issues with interactive content. The new tool will allow them to add rich text (making hyperlinks available), photo slideshows, videos, animation, music, audio, and more. You can do all of this without messing with the source code, as interactive elements are added using a “drag and drop” visual interface, the company told VentureBeat.

This seemingly low-tech solution for publishers is exactly what’s needed to bridge the gap between print and digital business models. I still remember when Apple made a huge fuss about the debut of its Newsstand and how magazines like Wired jumped on board with gorgeous interactive magazine issues that took full advantage of touch screen technology. The problem with these magazines is that you’re almost selling a different product that recycles content from the print edition — something that likely isn’t sustainable, especially if readers aren’t willing to purchase the digital version. That said, what Magzter is doing with MagEnhance is a far more reasonable solution and one that might even provide a new stream of revenue, should advertisers be interested.

“There is huge advertising potential here,” Magzter cofounder and president Vijay Radhakrishnan told VentureBeat. “Magzter has always made it possible for publishers and advertisers to scale print campaigns digitally. But now with MagEnhance, we can drive greater engagement that benefits both sides. Publishers gain another revenue channel, while advertisers can better interact with their audiences.”

The MagEnhance tools are available to all Magzter publishing partners free of charge. Expect to see digital editions of Macworld and PCWorld deliver some of the first interactive elements via the new tools.