But one app developer — The Hunt‘s founder/CEO Tim Weingarten — told VentureBeat that he would take a different approach in the future.

While “the conventional wisdom is build first for iOS,” he said, “if we had to do it all over again, I would launch on Android first,” or at the same time as iOS. More than half of The Hunt’s downloads are to Android devices.

The Hunt allows its three million, mostly female users to post a picture of some product they’ve seen online — such as a photo of a dress in a news story — and get feedback from the community of retailers and fellow shoppers about where that item or something similar is sold.

Weingarten noted that his company has “a very successful iPhone app, [with] thousands of daily downloads.”

“I’m not being negative about Apple.”

But, he pointed out, his company is “seeing much stronger engagement rates on Android.”

The company said the engagement differences are primarily related to functions that exist on both versions of the app, so they’re not due to version differences. 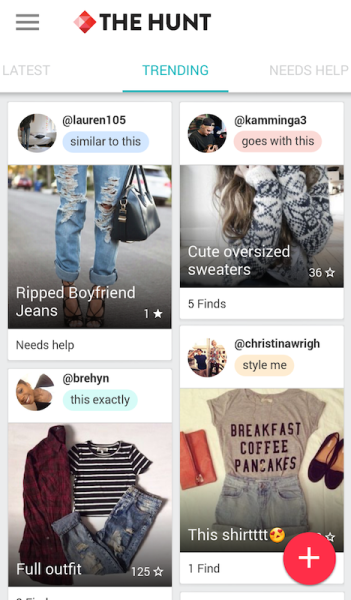 Above: Android version of The Hunt

Weingarten said, “These kinds of [design differences] result in incremental differences.”
But the difference in engagement in the two platforms, he said, is large enough that it is more than just variations in the interface.

He added that Android’s “design tools [have] advanced in the last 12 months,” and that the Material Design framework is “easier to design with and use” than previous Android tools. 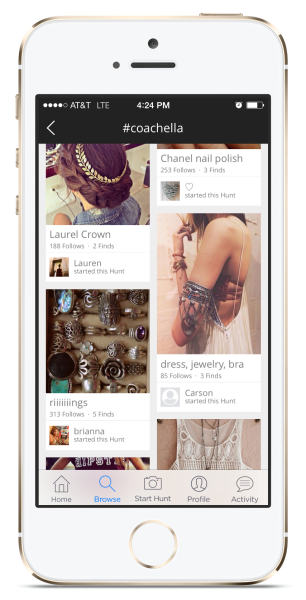 Above: A screen from the iOS version of The Hunt.

Another distinction between the platforms, Weingarten said, is that the Google Play Store “has a process that works differently from Apple’s” store. Google makes it easier for developers to correct a bug in an app that has already shipped to their store, while Apple requires that developers go through the approval process again.

“Software is an iterative process,” he said. “On the Play Store, you can do that, [but] on iOS, you’re doing more of a package.”

And he noted that Android is better at ecommerce and integrating third-party apps and partners for payments.

Android’s “development tools, the Google Play store, combined with their market share, leads us to the conclusion that it’s a great platform to work on,” he said.

Currently, The Hunt’s primary markets are in the U.S., the U.K., and Australia.

Last month, ComScore found that Android’s mobile platform market share as of September was 52.1 percent, compared to 41.7 percent for iOS. Worldwide, IDC has found that Android accounted for more than 84 percent of smartphone shipments in the third quarter of this year, with iOS representing 11.7 percent.