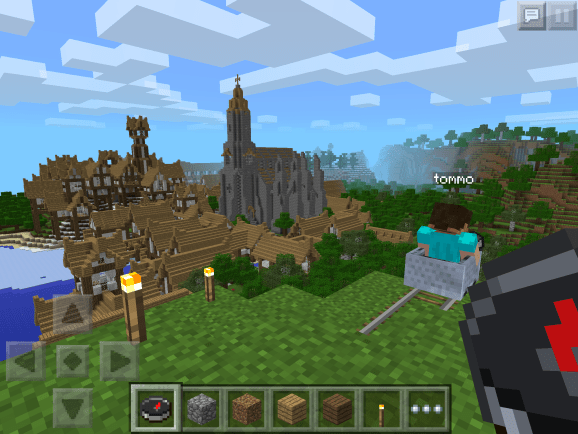 This article originally said Minecraft: Pocket Edition was the top-grossing app in the U.S. on iOS. That’s not accurate. It was instead the second-highest grossing game worldwide.

One of the biggest games in the world had a pretty great Christmas.

Minecraft: Pocket Edition was the second highest-grossing app for all of iOS on one of the biggest days of the year for mobile gaming, according to data from App Annie. Developer Mojang, now under ownership of Microsoft, made more money on Christmas with its block-building adventure than Kim Kardashian: Hollywood, Game of War, or Candy Crush Saga made for their respective studios. This is notable because Minecraft costs $7 to purchase, and “premium priced” games typically earn far less than free-to-play games with in-app purchases.

Christmas is a big day for app developers. Smartphones and tablets are popular holiday gifts, and many people spend Dec. 25 finding and installing games and other apps for their new devices. App developers have found that this holiday is similar to what Black Friday is for console gaming.

Minecraft’s continued success isn’t that surprising as it is one of the most popular games among young children and teenagers. It’s likely that parents purchased the Lego-like game for their kids after giving them an iPhone or iPad. It’s also possible that many people gave gift cards for the holidays, and people used those to pick up Minecraft.

But Minecraft’s success is still an anomaly. It first debuted as an unfinished game in 2009 before Mojang finally finished and “released” it in 2011 on PC. That same year, the studio released the Pocket Edition for iOS and Android. In the three years since then, Minecraft has continued to stay at or near the top of the charts on both platforms. Mojang has also gone on to release Minecraft for PlayStation 4, Xbox One, PlayStation 3, Xbox 360, and PlayStation Vita. It is one of the best-selling games on all of those systems as well.

In September, Microsoft spent $2.5 billion to purchase Minecraft and Mojang. The publisher says it will continue to develop the smash hit for non-Microsoft platforms as well.