Apple has received a patent for a stylus that may indicate the company is serious about building a tool that Steve Jobs famously hated. And despite Job’s opposition, a stylus could be just the thing the iPad needs.

Way back in the 1990s, Apple’s Newtons came with a stylus. And later that decade, the PalmPilot, which finally made personal digital assistants popular, came with a simple plastic one. For many years, the tech industry was focused on the opportunity to develop “pen computing.”

But in launching the iPhone at Macworld 2007, Jobs made it clear how he felt about needing a stylus.

Well, looks like Apple may one want after all.

In a patent approval first noticed by AppleInsider, Apple was awarded U.S. Patent No. 8,922,530 for a “Communicating stylus,” by the U.S. Patent and Trademark Office. 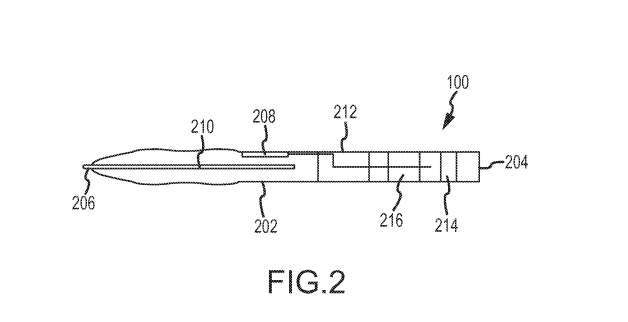 The patent approved this week covers a gadget that includes accelerometers, wireless transmission and storage. In theory, the device could be used to send handwritten notes or drawings from one device to another; in other words, the kind of functions that might be handy for meetings or for businesses in general.

And that’s why Apple may be taking a serious run at this: It could make the iPad more attractive to businesses.

As far back as the early 1990s, when the pen computing craze took hold, designers believed the stylus, or some kind of pen, would be a requirement for businesses that wanted more precision input.

Apple has always touted the iPad’s usefulness for businesses. But as sales of the iPad have slowed, Apple has focused even more on getting them into workplaces, including launching a partnership with IBM this year.

Obviously, multi-touch screens have opened up a new form of elegant interaction and input. But it’s quite possible that Apple is hearing from many businesses that they wish the iPad had a better way to enter information or create business-caliber documents. This is also likely part of the reason we keep hearing rumors that Apple is going to build a bigger iPad.

Does all this mean we’ll see a stylus from Apple in 2015? Impossible to say for sure, since the company files tons of patents for gadgets and services we never see.

But under chief executive Tim Cook, Apple has certainly shown itself to be more flexible and practical when it comes to adapting to the market (ie, bigger screens on the new iPhones) than it was under Jobs.

So nobody should be the least bit shocked if Cook stands on stage in 2015 talking about the wonders of the stylus, how Apple has believed in it all along, and all the magical things it can do for business.