Basic access to Gmail is starting to come back online in China on Tuesday after going down on Friday. The state-run Global Times China did not explain what caused the four-day outage, despite the fact that the government clearly implemented the block, and instead pointed to Google’s unwillingness to obey Chinese law.

All of Google’s products have been severely disrupted in China since June. While users in China are not able to access Gmail via the website, email protocols such as IMAP, SMTP, and POP3 had been accessible. The Great Firewall of China started blocking the IP addresses used by Gmail for these protocols, leaving users in China with no way of sending or receiving emails.

Google’s own Transparency Report showed a huge drop in traffic late last week. A slight uptick is now visible, as first noted by The Financial Times, though it is nowhere near previous levels just yet: 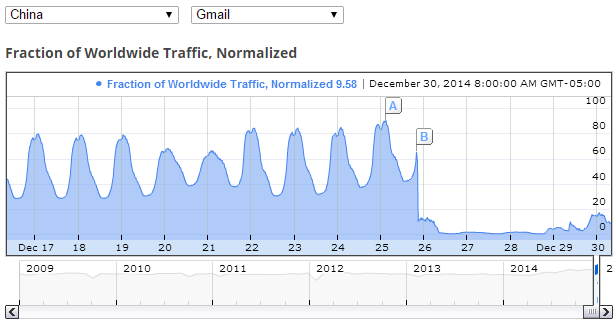 Globally, Google has run into conflicts with authorities constantly with issues similar to those it has with the Chinese government. China welcomes the company to do business on the prerequisite that it obeys Chinese law; however, Google values more its reluctance to be restricted by Chinese law, resulting in conflict.

The problems with Gmail access this time may be caused by the China side, by Google itself or a combination of the two. But Western media pointed the finger at Chinese authorities immediately, accusing them of strengthening its cyber censorship. This is far too simple a hypothesis. It should be noted that Google voluntarily quit the mainland market in 2010. The issue at heart is to what extent Google is willing to obey Chinese law, on which China’s attitude is steadfast.

A Google spokesperson previously said that “there’s nothing wrong on our end,” and third-parties confirmed the blocks appeared to be at the IP-level. Google’s various services, including Gmail, Google+, and Google Drive, were originally blocked this past summer in advance of the 25th anniversary of the Tiananmen Square pro-democracy protests.

It’s still not clear why this latest disruption occurred, and there’s no indication the issues will cease. This is yet another stark reminder of the difficulty foreign companies face when doing business in China.