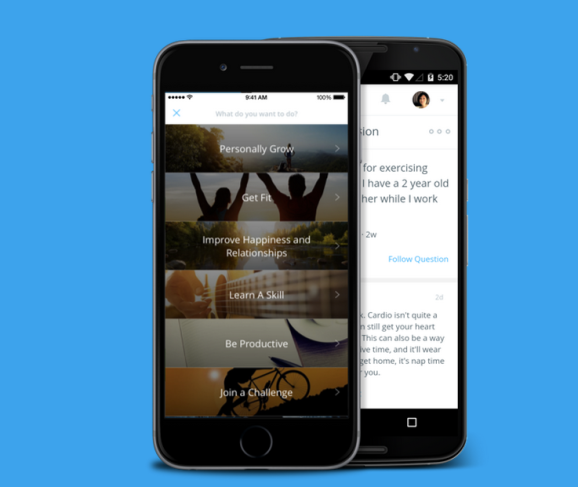 The man behind goal-setting app Lift, Tony Stubblebine, previously made a nice little living with a startup called CrowdVine, which provided social networks for conferences. But Stubblebine realized the conference business wasn’t his true calling. Instead, he wanted to help people achieve things, guided by his belief in “the compounding interest of specializing,” as he told me in an interview.

So he founded Lift, an app best known as a way to set and achieve goals and habits. Today Lift is announcing that it has been rebranded as Coach.me, to better reflect the company’s mission and budding business model.

Up until now, Lift’s app has let you set a goal you want to reach. It also came out with daily tasks you need to accomplish in order to work up to achieve your goal, helped you track your progress, and let you connect with Lift’s community for support and advice. It also offered pre-made plans, designed by coaches who provide assistance throughout — which is what Coach.me is now focusing on.

He wants to change the image Lift has of being a “habit tracker with a coaching feature,” he said. Coach.me is a place for people to get coaching, with however much support they want.

To start, Coach.me will offer one-on-one, chat-based coaching to its users. It will start at $15 per week, a price Stubblebine says is high enough to incentivize coaches, yet low enough for the community to want to pay for it.

Next, Coach.me will add paid plans, priced somewhere between $5 and $50, which Stubblebine says is already in the works. And eventually, it will add video chat-based coaching, something users will likely be willing to shell out more money for — say, $200 per session — once every so often for a higher-value connection with their coaches.

With that said, Coach.me isn’t getting rid of its simple habit tracking format, so fans need not worry.

Interestingly, Stubblebine doesn’t view Coach.me as purely a marketplace or a product. The startup supplies coaching resources to its users, yet does so by creating a marketplace where coaches and users meet.

Coach.me and Stubblebine have been influenced quite a bit by Twitter, whose founders have been investors, bosses, and board members to the company.

Coach.me already has 700 active coaches on its marketplace and more than 1,000 on its waitlist, which the startup will be onboarding. Stubblebine added that becoming profitable in the next year is one of Coach.me’s goals, now that it has finally set up a revenue model.

The company was incubated at Obvious before launching last year. It’s based in San Francisco, and it recently raised $1.1 million in follow-on funding from current investors Obvious Ventures and Spark Capital, bringing its total to $3.5 million.