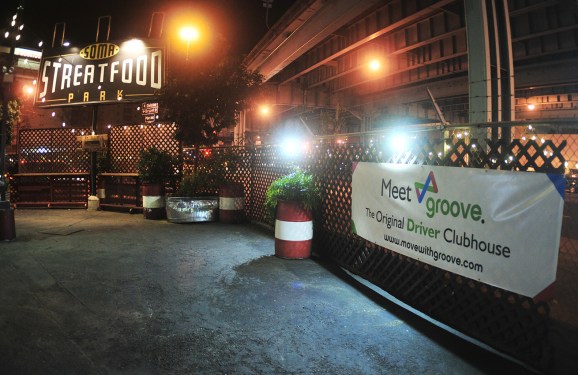 If there’s one thing Emmanuel Bamfo truly got a front row seat to during his time at carpooling service Hitch, it’s how little resources drivers get, especially to take breaks and refuel.

So it’s no surprise that, following Lyft’s acquisition of Hitch a few months ago, Bamfo set out to build a company that would focus on the drivers of the alternative car and delivery services. His company, Groove, is launching today with the opening of its clubhouse.

The clubhouse is in San Francisco’s SoMa neighborhood. It provides a place to relax, take a bathroom break, grab coffee, use Wi-fi, and hang out with peers — for a $30 membership fee. It will be open 24 hours a day, seven days a week.

At its core, Groove is about taking care of the drivers whose work is central to all kinds of popular services, from Uber and Lyft to Postmates and BloomThat, with physical services like its clubhouse, as well as with technology tools it will eventually release.

“Hey, it doesn’t matter if Uber has $1 trillion — if it doesn’t have drivers, it dies,” Bamfo told me in an interview.

The company is hiring developers and will release three driver-focused, technology-based tools in the next one to three years, Bamfo said.

“We’re going to provide technology and services knock their job out of the ballpark,” he said.

One of them will be a sort of “Yelp for ride-sharing and delivery services,” that will contain continuously updated feedback and information gathered from drivers, passengers, and customers. It would both serve as resource for drivers deciding which services they’d like to work for, as well as to help customers stay updated on the services they use or consider using.

We can also speculate that the other tools could help drivers manage things like their car, a bit like Automatic’s smart car accessory. Eric Xu, currently at Fitbit and previously a member of Google’s driverless car team, is an advisor to Groove, a possible clue about what kind of car technology the startup is dreaming up.

Managing their daily income and spending could be another category — keeping track of rides, distance, gas purchases, juggling multiple employers, and so on. SherpaShare is already providing this kind of tool for contract employees.

Bamfo’s goal is to build “a central headquarters for everything on-demand,” as he said, though a union is not in the works, despite how it sounds.

But with the rise of contract workers in parallel with the emergence of more on-demand services, Groove will likely fill a big gap that individual on-demand service providers can’t, especially with some contractors working for more than one of them.

Groove has been bootstrapped so far, but it’s already attracted some advisors such as Xu, Philip Thomas of OpenDNS and the driver behind the famous Disco Lyft. Companies such as Sidecar (where one of Bamfo’s Hitch teammates works now) and Breeze are already working with Groove, and the startup has been talking to many others to bring encourage their drivers to join.