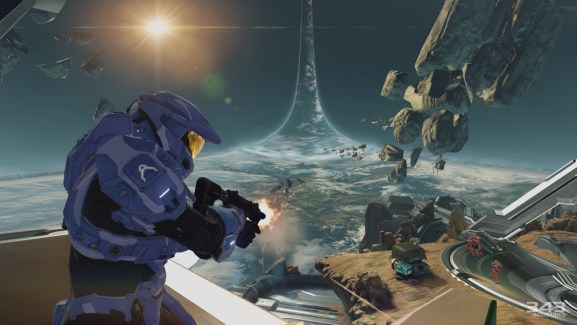 Halo's last outing is still busted in some key ways.

While Microsoft is already looking forward to the next Halo game, fans are still worrying about the most recent release in the series.

The Halo 5: Guardians beta started yesterday, and most people are having a great experience with developer 343 Industries’ early test for the sci-fi shooter. Halo 5 will hit Xbox One next year, but it may come out to a fanbase that has cooled toward Microsoft’s biggest franchise. And that’s because of Halo: Master Chief Collection, which just released in November. This compilation of Halos has had a number of issues since its launch, and players on Halo forums and 343’s own message boards are making it clear that they aren’t going to forget about the last game just because they have a shiny new Halo 5 beta test to try out.

When the Master Chief Collection first hit Xbox One, its online components barely functioned. The disc brings together Halo, Halo 2, Halo 3, and Halo 4, and it enables you to jump into different maps and multiplayer modes from all of those games. But a number of matchmaking problems kept people from playing online. Even when they did find a match, it would not replenish lobbies with more players as others quit. It wasn’t fun, and it took Microsoft some time to address and correct many of those issues.

But Halo: MCC still needs attention. The matchmaking, hit detection, parties, and co-op all have problems in one way or another. 343 has made some fixes, but it still has a lot of work to do.

The matchmaking can sometimes still take an epoch to find a match. Some players are reporting waits of up to 45 minutes. Hit detection on Halo 2 Classic maps isn’t working. This is especially noticeable when using a sniper rifle, where you can see shots that would normally kill a player go right through them.

Check out the hit detection failing in action:

Parties still don’t work like they should. After a match, players that join a game as part of a party are still getting broken up. 343 has tried to deal with this particular bug on multiple occasions, but it continues to happen.

Problems are even popping up in cooperative mode. Sometimes when players try to play through bits of Master Chief Collection online with each other, the shooter can lose the synchronization or crash completely.

With all that said, Master Chief Collection is in significantly better shape than it was just a few weeks ago. That’s thanks to a patch 343 released on Dec. 22. The studio worked on a number of matchmaking and other multiplayer issues in that update, and it really seemed to make a difference. But the developer has hushed up about any future improvements. Instead, 343 and the Halo Twitter account have shifted focus to the Halo 5 beta.

That shift in focus makes sense. The beta test has had a relatively smooth launch (except for a few small issues), and that’s probably a relief for Microsoft.

The publisher knows it cannot have a repeat of Master Chief Collection’s launch — Microsoft risks tainting the Halo brand forever. With that in mind, the company explained what it’s looking for in the beta.

“We will be monitoring all sorts of data within the Halo 5: Guardians Multiplayer beta,” a Microsoft spokesperson told GamesBeat. “That includes things that impact gameplay balance such as weapon kill rates, Spartan ability usage and map exploits; data regarding player preferences for things like controls and settings, game mode and map popularity as well as more technical data such as network connectivity and server scale.”

Of course, the cynical take on this beta is that it is really more a marketing promotion. Microsoft is even running commercials for it during college football. That’s something we haven’t seen before. But it’s likely that while Microsoft wants to promote Halo 5 with the beta, 343 is using this test to prevent a repeat of MCC.