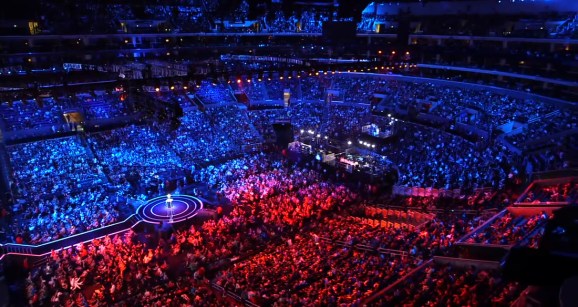 North American League of Legends players are reporting some latency, and many are demanding that developer Riot add more servers. But that probably won’t solve the problem.

Gamers on the League of Legends subforum on the Internet aggregation website Reddit are reporting high pings when playing Riot’s multiplayer online arena battler. A ping is a measure of how long it takes for data to get from your computer to a game server. The lower the number, the better the performance you’ll see online. Many people are finding that they have pings of more than 100 milliseconds in League of Legends while other games are significantly lower. Naturally, this has dedicated League players pointing the finger to Riot’s insufficient servers, but the problem is more likely with the backbone of the Internet.

Riot’s North American servers are located near Portland, and many people having issues are in the Eastern time zone. If you’re in Florida, that’s nearly 3,000 miles away. But the distance isn’t necessarily what is causing the lag — although it doesn’t help. Instead, the real issue is how traffic is routed over the Internet. When you send data from a home in the East to a server in the West, that data jumps across a number of other servers controlled by giant Internet companies like Verizon, AT&T, and Comcast. The more times that data bounces from one server to another, the longer it takes to get to its final destination. And over the last few years, the people who control these Internet highways have added more stops along the way.

I’m in Denver, and my ping is in the 50-to-60 range, but a trace route of Riot’s North American server bounces me through more than seven different nodes — one of which is in Seattle. The solution for too many hops probably seems obvious: build a server closer to people in the East. But a great distance is not a problem for many people in North America pinging League of Legends servers located in Latin America.

Some people in cities as far away as Toronto in Canada are finding that they get far better pings for servers in Chile than they do for the one in the United States. This isn’t because of just bandwidth or server capacity, it’s because of the way Internet companies in the U.S. route traffic.

Need some evidence? Just look to Netflix, the video-streaming service that consumes more bandwidth than just about anything else. Netflix is paying extra to get a direct connection to the primary servers of the Internet, which is something that makes a lot more money for the big Internet Service Providers.

Over the last year or two, Netflix realized that it didn’t matter how many servers it built, it was coming up against a hard wall when it came to delivering high-definition video without lag or latency. That wall is Verizon, Comcast, and other ISPs.

Now, Riot is dealing with the same thing — only it hasn’t caved yet. Netflix has made deals with Verizon, Comcast, and AT&T while at the same time blasting all three for essentially shaking down Internet companies.

While investigating this story, Riot told GamesBeat that it is trying to do everything within its power to improve connections. But it isn’t sure if that includes paying the extra fee to ISPs or what. In the meantime, the company realizes how upset its fans are, and it feels pretty helpless since it has little control over how Verizon and Comcast treat its traffic.