Monster Strike is being called the game that saved Mixi.

As one of Japan’s first major social media services, Mixi was facing a MySpace-esque future. Fresh competition moving into the space and sucking up active users threatened Mixi’s relevance, which created a downturn on the value of their stock. After several strategic partnerships, start up acquisitions, and even a new CEO, the situation remained dismal.

One place where the company had made significant investment was in their internal game development group, of which the famous arcade-era designer and producer for Capcom, Yoshiki Okamoto (Final Fight, Magic Sword, Street Fighter II), and Mixi producer Koki Kimura, were working on a strange billiards role-playing game and monster-catching title.

In late 2013, Okamoto and Kimura released Monster Strike on the iOS and Android platforms. It became a major hit in Japan and has pulled in a ridiculous amount of money for the company.

In October, Mixi released a North American version of Monster Strike, with a Korean version following closely in November. After wrapping up their worldwide Monster Strike press tour, Yoshiki Okamoto and Koki Kimura were kind enough to talk with me about their earlier experiences, Monster Strike, and their perspectives on game design. 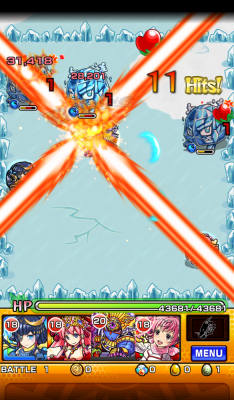 Could you tell us a little bit about how you two (Yoshiki Okamoto-san and Koki Kimura-san) met? What prompted you two to work together on a project like Monster Strike?

Koki Kimura I was basically the world’s biggest Street Fighter II fan and Okamoto-san was one of my biggest personal heroes.

I was working at Mixi as an account manager for a DeNA-style mobile game platform we had, but this was the time of so-called “feature phones.”

Okamoto-san had coincidentally created a game on these phones and we ended up negotiating to feature it on the platform.

Yoshiki Okamoto And I was, believe it or not, actually a huge fan of Kimura-san, as I really loved Mixi’s products. It was just meant to be!

What were your roles on the project?

Okamoto I was the game director and Kimura-san was the producer. He set the goals and basic standards for the game.

Kimura, the world is very aware of Yoshiki Okamoto’s past, but we haven’t heard too much about yourself. What were you doing before Monster Strike?

Kimura I’ve always been at one social networking company or another. But being a game producer was my absolute dream.

I find the marriage of billiards and action-RPG elements in Monster Strike really interesting. What motivated you guys to come up with this core gameplay idea?

Kimura The idea behind that was, you know how in most action RPGs there are two basic controls? You move, and then you attack, right? Move. Attack.

We wanted to simplify those controls by combining them into one single motion. So you pull back and fling, and your character moves and attacks in one smooth motion. 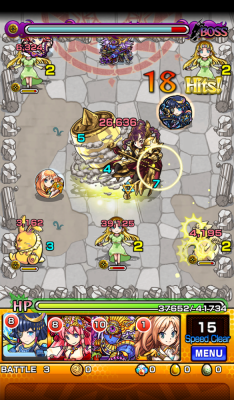 What do you feel has been the key to Monster Strike’s financial success?

Okamoto It’s a game people want to play. It’s not a free-to-play game. It’s a fun game that we poured our hearts into, and it happens to be free.

Kimura It’s also all about the face-to-face aspect. That was the goal, after all: To make a game that people could enjoy with their friends and family; a truly multiplayer game.

You’re not sitting in front of a computer or TV screen and passively interacting with people like most so-called “social games” or even a lot of traditional multiplayer games like FPSs. You’re actually playing at the same time, right there with your friends and everybody’s getting pumped.

It’s beyond synchronous/ashynchronous – you’re heavily rewarded for playing together, right there, with friends.

Obviously going cooperative is working out great for Monster Strike. Was going purely with cooperative multiplayer instead of adding a directly competitive element always the direction the project was taking?

Kimura Yes. We wanted to bring people together. We also wanted to avoid that “pay-to-win” aspect.

When you pull on the Hatcher and you get one of those really cool monsters, your friends are happy for you, and now you can all share in the spoils because now your friend that just won that cool monster can come and help you out in Event Quests to get your own cool monsters. 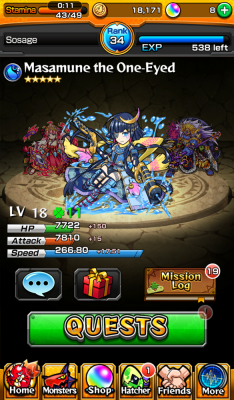 When I congratulated Kimura on finishing Monster Strike during a separate conversation, he corrected me and said that it wasn’t “finished.” He said that there were still some extras and updates that the team wanted to add to the game. Can you give us an idea of what Monster Strike players can look forward to in the future?

Okamoto Monster Strike is updated every day with new stuff. That’s why we have such a gigantic team working on this. It’s a constant work in progress. We’ll never really be “finished” with it. What can fans look forward to in the future? Well, that depends on what the fans ask for.

Former Sega arcade game designer, Yu Suzuki, mentioned at GDC 2013 that during his time creating these arcade games, he had to become the master of the “3-minute design.” Within 3 minutes he had to capture the player and convince them that the game was worth devoting more time and money into. Otherwise, the game could lose that potential player forever. Not to be presumptuous, but I am very sure Okamoto can relate to this, being one of the legends of arcade game development.

Do you feel mobile gaming today has developed its own version of the arcade’s “3-minute design” rule?

Okamoto Of course there’s an element to that. That’s why mobile games all stack their most fun parts at the very beginning. They know they’ve got you hooked after that and the rest of the game can just be kind of mindless.

Monster Strike is different, because the more you play it the more fun it gets. There’s a difficulty progression. You’ve got to play and get better to get cooler monsters and have a shot at the harder levels. A lot of the Event Quests are pretty tough and you’ve got to work together to bring down those bosses.

Of course, we think those simple Pull and Fling controls are enough to draw people in right away, so we’ve kind of got the best of both worlds. 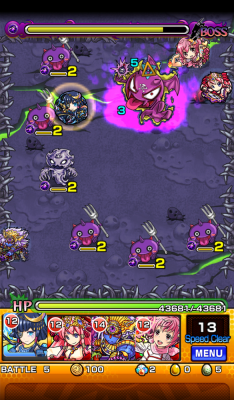 It may be too early to tell, but are you noticing any differences in how players are reacting to Monster Strike in the various regions it is launching in? Are you also noticing any region-specific play behavior, such as American players tending to play this style of strategy vs. Japanese players that play a different style?

Kimura Actually, we were worried American audiences would be turned off by the local nature of the co-op play. It’s such a huge, wide-open country, so the tendency is to play console or PC games online so you don’t have to physically drive out somewhere.

But what we found is that people are really loving getting together and playing the game face-to-face. Our launch party in San Francisco was really well received, and people showed up to the ongoing Monster Strike Corner events at the venue week after week.

Okamoto-san, if I was teaching a game design class and we’re on the chapter about Yoshiki Okamoto, what would be the “Yoshiki Okamoto” defining game of your career so far? This would be the game that I would hand the students and say, “If you only play one Yoshiki Okamoto game, it needs to be this.” And why?

Okamoto Monster Strike would be my career-defining game.

In Japan, it’s already clearly surpassed the popularity of any of my previous works. It’s also the one I’m most proud of. It’s brought me closer to my fans than ever because I can actually see their feedback and implement it into the game.

That’s awesome and that’s how games should be.