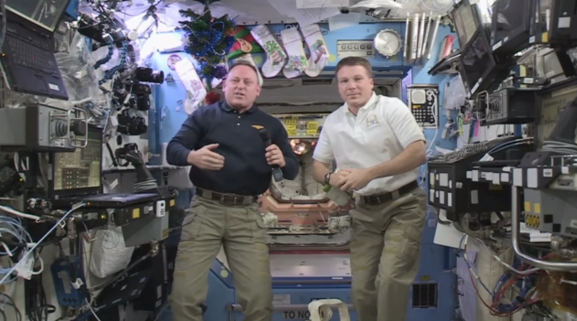 When you’re hurtling through space at 17,100 miles an hour, you can be forgiven for not having time for a lengthy New Year’s celebration at midnight. So why not do it over and over and over again?

That’s what the astronauts and cosmonauts aboard the International Space Station (ISS) will be doing. In a video posted today, NASA astronauts Barry Wilmore and Terry Virts wished those of us stuck in single time zones here on Earth a Happy New Year, saying they would be celebrating by flying over 16 separate midnight celebrations of the transition from 2014 into 2015.

“We figure that we will be over midnight somewhere over the Earth 16 times throughout this day,” Wilmore, the commander of the current ISS expedition, said in the video. “So we plan to celebrate NY 16 times with our comrades, our people down on Earth that are doing it at that very moment.”

The two do not explain why they’re only passing over midnight 16 times, given that there are 24 — or 25, according to some — time zones on Earth.

Unfortunately, the video does not show the astronauts popping a bottle of Champagne. It would be something to see all that bubbly in zero-gravity. Although it could probably do real harm to the ISS’ delicate instruments.