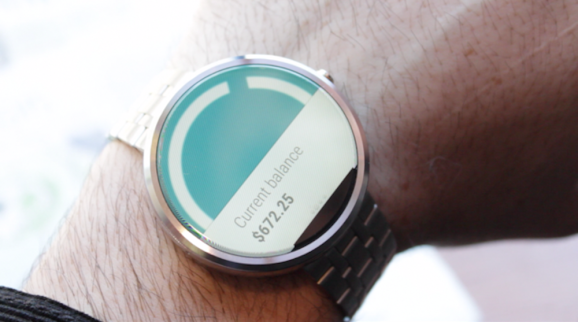 Moven’s technology has been on the market for less than a year, and in that time the company says it has accrued “tens of thousands of users.” Moven thinks there’s an immense opportunity with wearables to help shape consumer spending behavior. And it’s not the only one. Advertisers and merchants are increasingly taking advantage of mobile and wearable push notifications to lure customers into local stores and get them spending. Moven’s technology works much the same, though instead of alerting you to coupons and sales, it sends you a real-time analysis of your spending habits.

Founder Brett King says Moven is like a health tracker for your finances, which is why it’s ideal for smartwatches. He’s also hopeful that wearables will ultimately function as a payment method using Near Field Communication technology — like Apple Pay on the Apple Watch.

King has spent the last five years waxing poetic about what needs to change in order to move the banking industry and payments processing forward. In addition to hosting a radio program titled Breaking Banks, King has worked on technology surrounding financial services since the early 1990s. The idea for Moven came about during a conversation between King and several venture capitalists over breakfast shortly after the release of his book Bank 2.0. While discussing the future of banking, one of the VCs asked, who would be best suited to tackle the problem — banks or startups?

Realizing that startups would be better positioned to remodel banking constructs, King quickly got to work on his own banking concepts, which led to the birth of Moven — a banking product focused on the daily consumer experience.

Over the last several years, a slew of applications promising to help consumers better handle their finances have emerged, including Simple Bank, Moven, and Mint. Simple and Moven both partner with banks to provide users with FDIC-insured bank accounts that their financial technology sits on top of. For example, Simple bankers can track their spending habits and also input planned expenses. Instead of a bank balance, Simple gives users a “safe to spend” amount, which accounts for upcoming bills — as long as users have taken the initiative to punch in that data.

Moven, on the other hand, considers itself the anti-budget. You use Moven’s debit card like you would any other, and Moven’s technology analyzes your spending data. Moven’s spending meter (similar to Simple Bank’s safe-to-spend) assigns users a green, yellow, or red rating based on their how much you’ve spent in a given category as compared with other months to nudge you to make better financial decisions. The mobile app also uses a sort of shock tactic to get you saving money. After a purchase, you receive an “instant receipt” on your phone that tells them how much you’ve spent in total for the month or the week on a certain item.

“I found out I was spending over $400 a month on taxis. That was the aha moment for me,” said King. Since then, he’s started using Citibike, taking the subway, and using alternative methods of transport to cut down on his car habit. Enabling these push notifications on smartwatches is the next step to making Moven’s technology more pervasive and potentially more effective. Imagine how your spending would change, if every day after you’ve purchased that expensive sandwich from the deli next to your office, your smartwatch pinged you with your monthly food expenditure bill. You just might start brown-bagging your lunch.

In terms of wearable budgeting devices, only financial expert Nicole Lapin has released anything like Moven’s wearable app. In February Lapin rolled out the Cash smartwatch, which lets you track your spending throughout the day by punching purchase data into the smartwatch as it happens. You can then use the desktop application or mobile app to track spending and update your budget. However, Cash has requires a highly motivated user; someone who won’t get fatigued by entering every purchase into Cash’s tiny interface.

Moven automates tracked spending, but it’s only intended for discretionary funds (Moven’s founders expect you to have multiple bank accounts — one for savings, one for monthly bills, and one for leisure spending). In a way, Moven’s technology is more like an updated bank account passbook (those slim staple bound notebooks that used to accompany bank accounts and log transactions) than a way of budgeting. It’s a tool that keeps you aware of your spending.

“If you want to get someone to save money, all you really have to get them to do is stop spending money. Instead of trying to build discipline, which is the hardest part of changing spending habits, we find the behavioral approach is much more powerful,” said King.

Budgeting is inherently difficult, because it requires you to anticipate expenditures, spend thoughtfully, and keep track of everything you spend. Moven operates under the premise that you don’t have to be thoughtful about spending as long as your bank can offer you meaningful data about where your problem areas are. If you are frequently reminded of your bad habits, you may curb their spending, as King did. But spending less is just the tip of the iceberg in terms of good money management.

Moven may be able to scare people into being more frugal, but planning big purchases, dealing with unexpected expenses, and accruing meaningful savings really requires engagement — not automation. And ultimately those smartwatch push notifications may become more annoying than helpful.

Still, Moven has higher aspirations than just getting you to spend less. The company is looking into ways to incorporate NFC technology, so you can debit money directly from your phone or wearable — much like Apple, Google, and PayPal are already doing. The company is also interested in working on a way to facilitate instant debit to debit transactions.

In the meantime, Moven has its eye on the Apple Watch and will be working to bring its technology to more wearables in 2015.