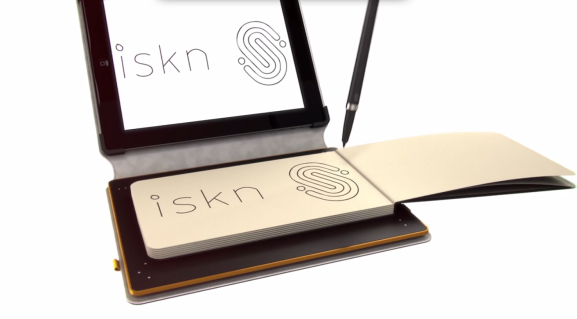 As much as some of us hate to admit it, paper is still around despite the fact that we live in the “digital age.”

Iskn (pronounced “i-skin”), a French startup that raised previously just under $350,000 on Kickstarter, built an iPad cover that digitizes whatever someone writes on a piece of good old-fashioned paper, is announcing today that it has raised $2 million in seed funding.

The iSketchnote is a connected iPad cover on which you can attach a piece of paper, and write and draw with iskn’s special pens. The cover digitizes the writing or drawing in real-time, which you can edit, save, or share from your iPad with the iSketchnote app. Iskn’s pens don’t have electronics inside, but do have a magnet ring that enables the cover to pick up on what you’re writing.

Along with being a fun gadget, the iSketchnote could be a very useful tool for illustrators, other designers, folks who need to sketch diagrams, and many other cases.

The idea of enabling handwriting to be digital is not new, and others have developed similar products or taken different approaches for a similar results. Evernote, for example, has Penultimate, an app that turns the iPad into a writing surface with the help of a special stylus.

Iskn will be present at this year’s International Consumer Electronics Show (CES), and says it will be unveiling “new perspectives” there, possibly the latest version of its product, which is set to finally start shipping early this year since closing out its Kickstarter campaign in the fall of 2013. Currently, the cover works for both the iPad and mini iPad, with more operating systems coming in the future.

Partech Ventures led the round, with additional participation from CEA Investments, Kima Ventures, and Pascal Cagni.