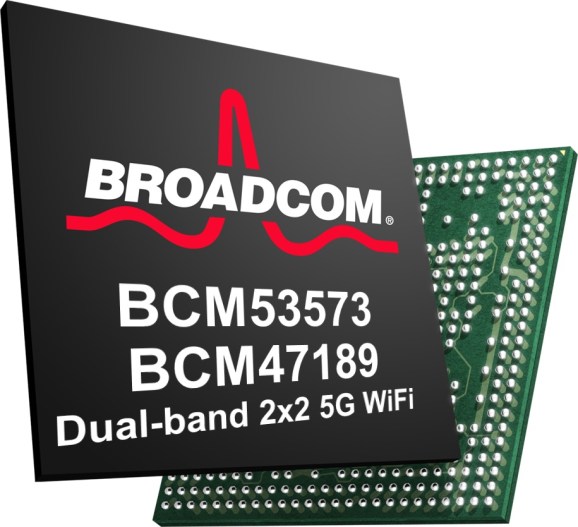 Networking chip giant Broadcom is announcing what it calls the world’s fastest 5G Wi-Fi chips for wireless networks and wired routers. The chips could lead to more reliable delivery of wireless video streams to living-room gadgets.

The new chips use 4×4 MU-MIMO technology to send more data through the airwaves simultaneously, and Irvine, Calif.-based Broadcom says it can design this tech better than anyone else. The chips can also be used for set-top boxes, Internet gateways, and routers.

The company announced its BCM4366 at the 2015 International CES, the big tech trade show in Las Vegas this week.

Broadcom will demonstrate the 802.11ac Wi-Fi version of the chips streaming high-definition video at CES to multiple devices in a home.

The BCM4366 incorporates multiple 802.11ac Wave 2 features, including a MU-MIMO implementation, which delivers up to a four-fold speed boost. For routers, Broadcom will couple the chip with another chip, the BCM47094 network processor SoC running at 1.4 gigahertz.

“802.11ac access points are expected to nearly 60 percent of consumer Wi-Fi equipment shipments in 2016,” Philip Solis, director of research at market research firm ABI, said in a statement. “Broadcom has captured a leading position with Wave 1 802.11ac. With Wave 2, Broadcom is enabling its customers to bring the next generation of 802.11ac products to market.”

The chips are available in sample quantities now.