In 2014, few things were more popular than Disney’s animated smash hit Frozen, but here’s one thing that was: Minecraft.

Google recently released a report about gaming content on YouTube, and the company included a list of the top search queries on its video site. “Music” topped the list, but “Minecraft” was the second-highest search term. The next closest property was “Frozen,” but people searched for it less than half as much as Microsoft’s block-building phenomenon. Just behind Frozen (and musical artists Drake and Beyonce) is YouTube gaming personality PewDiePie, who is making $4 million a year thanks to his videos.

Google insights lead Gautam Ramdurai goes on to argue that Minecraft and PewDiePie represent a gigantic thirst for gaming-related content on YouTube that will continue to grow in 2015. As recently as 2013, gaming was the second most popular category on YouTube among young people behind only music. Six of the top 10 most viewed YouTube channels are about games.

“Sometimes watching someone else play a game can be as much fun as playing yourself,” writes Ramdurai. “This isn’t surprising because we engage in similar behavior when watching the Food Network. Even though we can’t taste the food being prepared on shows such as Chopped, the process, tension, and competitive nature make for great entertainment.” 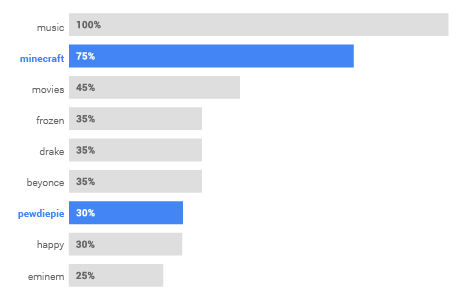 Google also recently conducted a survey of YouTube viewers that asked what they like about gaming videos, and many people pointed to the reactions and commentary for reasons why they watch. Even if someone is bad at a game, many people will tune in if they are funny or gregarious.

That type of content even appeals to people beyond the typical gaming audience. Only 37 percent of the people who watch gaming videos on YouTube consider themselves “gamers,” according to Google’s survey. People are subscribing to PewDiePie for a laugh and not because he’s playing some particular game. Google notes that people cited “entertainment” and “humor” as reasons they watch gaming videos as often as they mentioned “game tips” or “learning new strategies.”

Naturally, for Google, these kinds of popular creators is a money-making opportunity. The millions of views that PewDiePie gets for every video means more advertising revenue, but Ramdurai wants marketers to think beyond the preroll video ad.

One way to take advantage of YouTube creators is to hire them to market products. For example, Legendary Pictures paid to send PewDiePie to Paris as part of a promotion for the horror film As Above, So Below. The two-part video promotion earned a combined 10 million views, and the people coming to watch these commercials were happily consuming sponsored content because it features someone who they love.

Ramdurai thinks that this is only the beginning for YouTube creators turning to marketing.

“Even though gaming has been prevalent in our culture for decades, the rise of gaming video content is fairly recent,” writes Ramdurai. “Brands have a unique opportunity to jump on a rising trend that millions of millennials engage with every single day and connect with them in a genuine way.”