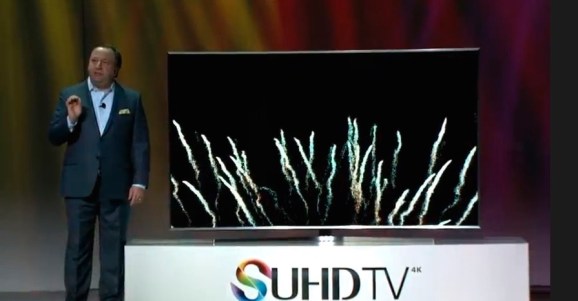 Samsung announced a new 88-inch television screen that features an upgraded 4K picture quality via its “SUHD” technology during a press event today at CES 2015.

If you’re confused as to what “SUHD” (aka Samsung Ultra High Definition) is, don’t fret. Basically, Samsung said it’s able to deliver better video quality using its nano semiconductor crystal tech than you’d find on a regular 4K TV screen. The screen itself is more than twice as bright as a traditional set, and it can deliver deeper blacks. That means richer, more accurate colors, among other things. (At the same time, it seems like a marketing strategy to rebrand Samsung’s line of 4K TVs.)

Samsung was quite proud of its efforts to support not only 4K screens, but also content, having made over 500 4K movie titles available via its media platform. The company also revealed that it teamed up with 20th Century Fox to make sure the picture quality for Fox movies was optimized using a remastering picture engine.

The company said that its SUHD television screens don’t just improve the color detail and accuracy of 4K content, but also of boring regular HD video as well.