Two months to the day after Microsoft launched a trio of all-new Office apps for Android tablets, the software giant has today revealed that Word, Excel, and PowerPoint are now available for anyone to download with a compatible device.

The initial launch back in November accompanied a broader shift in the Office strategy on mobile, as Microsoft made creating and editing documents completely free, removing the need for an Office 365 subscription. This was in addition to new standalone Word, Excel, and PowerPoint apps for iPhone and Android tablets, though the latter incarnations were made available in limited “Preview mode” at first. 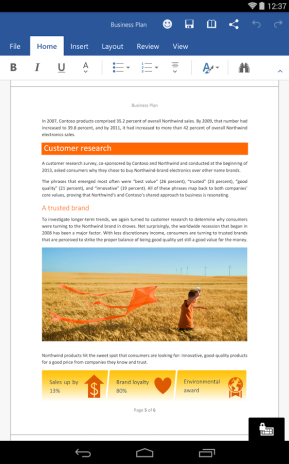 Indeed, access to the Android tablet apps has hitherto only been granted if a user was invited by Microsoft through a Google Plus group, but following a two-month feedback period, it’s now open to anyone to download from Google Play.

The three apps still remain in “Preview” mode for now — this isn’t the final launch version, and Microsoft wants much more user feedback. But by opening things up, the company should stand a better chance of gaining just that.

The apps are compatible with any 7″-to-10.1″ ARM-based Android tablet (most of the popular ones, basically) running KitKat or Lollipop.

While Microsoft Office was once the dominant, omnipresent force in both the business and consumer productivity software space, it has faced increasing challenges in recent times from free Cloud-based offerings from the likes of Google. While having access to Office for free on Android tablets is undoubtedly a good thing, for many it’s a move that may have come too late.