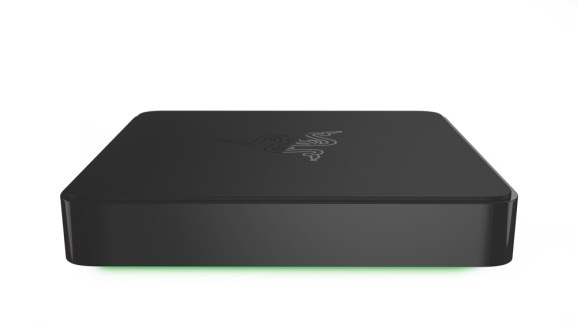 Razer Forge TV is small, and has no moving parts.

Razer is making its move into your living room with what CEO Min-Liang Tan is calling the “future of consoles.”

The maker of high-end gaming hardware announced the Razer Forge TV, an Android-based microconsole set to launch in early 2015. The introduction of this little box would have the Carlsbad, Calif.-based company simultaneously dipping into both the emerging streaming game business and the $25 billion dollar mobile-gaming market. Announced today at the 2015 International CES, this quad-core system with 16 GB of storage and wireless network connectivity will bring both downloadable mobile Android games and streaming PC games to televisions via HDMI output, and it’s priced at $100.

Aside from Android gameplay, the tiny Forge (4.1 inches square, 17 mm in height) will also support a number of streaming media sources, including Hulu, iHeartRadio, and YouTube. PC game streaming comes in the spring with the beta launch of Razer’s Cortex: Stream launcher. Razer says their proprietary technology will bring full HD, low-latency PC game streaming over both Ethernet and Wi-Fi connections, setting the Forge above any of the Android game-only set-top boxes like Ouya.

Forge will act as the hub in Razer’s new “gaming ecosystem,” designed to work alongside their gaming peripherals via Bluetooth, including their newly announced gaming controllers: the Sevral and the Turret. Designed by the same team that created their Xbox Sabertooth controller, the Serval ($80, available Q1 2015) pulls double-duty as both a Forge controller as well as a phone or tablet controller (complete with device clip) for Android games. The Turret ($130, available Q2 2015) is a wireless solution that reworks the standard mouse and keyboard gaming combo to fit in the user’s lap. Forge will support up to four connected controllers.

Razer’s microconsole comes at an interesting time, scheduled to land just as Valve will have started ramping up for the launch of its Steam Machines. While Steam Machines are designed to install and run games directly from the system, one of the tricks up Valve’s sleeves is PC game streaming from another networked computer. Razer could beat Valve to this — and given that Steam boxes are estimated to start at around $500, at a much lower price.

It will be interesting to see if Razer can get high-quality, low-lag PC game streaming up and running before Valve does.