LAS VEGAS — Somewhere deep in the heart of the 2015 International CES, one electronics company decided to eschew the floor of the Las Vegas Convention Center for that of the space right outside of the press conference overflow room. California-based IO Hawk was giving anyone who passed by a tour of its Smart Wheels device, a forward-facing, skateboard-like toy that uses a smattering of gyros, electric motors, and wheels to zip riders around. Simply step on and move. 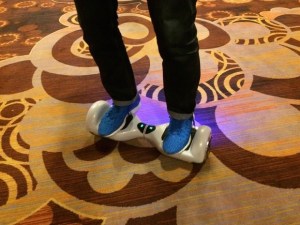 Above: Smart Wheels skateboard in action

Smart Wheels’ “smartness” lies in its ability, like a Segway, to balance the user who’s riding atop it. The sensation is scary, but if you’re into skateboarding, snowboarding, or skiing, the one sensation you notice most is that Smart Wheels are fun.

The specs? After less than three hours of charging, Smart Wheels propels riders at up to 6mph for a range of about 10-12 miles. The devices are available for worldwide shipping at iohawks.com for $1,800. The devices come in a range of colors including white, red, black, and yellow.

The staff was overwhelmed with the popularity of the device. Our impromptu interview was cut short by enthusiastic would-be riders eager to jump onto the wheelies without hesitation — or supervision.

Despite the initial trepidation users may feel when they first step on the device, it was clear to us that anyone with a decent sense of balance and a bit of persistence could get the hang of Smart Wheels in about 10-15 minutes.

And while everyone who attempted to ride eventually got the gist of it, we were all pretty happy the demo took place on the lush pile of a convention center carpet.

Smart Wheels represent something of a refreshing product at CES 2015. This year’s offerings are saturated with exhibitors riding the tide of mobile, wearables, the smart home, and the rest of the “Magnificent Seven.” The fact is that while nearly everyone enjoys the idea of an Android device embedded into the interface of their oven, IO Hawk’s Smart Wheels reminds us of a time before we were all cybered out — when the future was about a cloud that you could reach with hoverboards and flying cars rather than Androids and Apples.