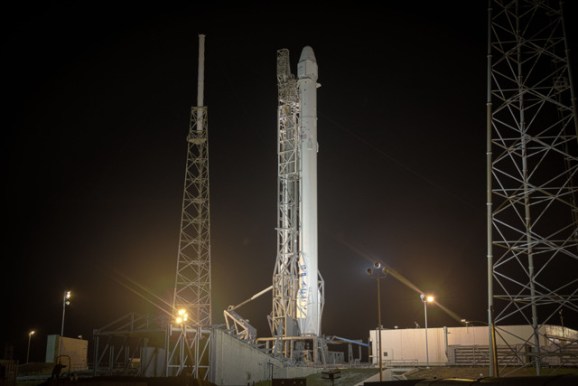 Falcon 9 by SpaceX prepares to launch.

Update: The launch of the Falcon 9 rocket has been postponed at the last minute due to “the upper stage Z actuator” which “was behaving strangely,” as Elon Musk put it. The next attempt will be on Friday, January 9, at 5am ET.

SpaceX is scheduled to launch its Falcon 9 rocket today at 6:20 am on the East Coast for a risky test flight that even the company says has less than a 50 percent chance of being successful.

The company will attempt to land a Falcon 9 first stage on an ocean platform it calls an “autonomous spaceport drone ship.” While SpaceX has previously staged two soft landings in water, nailing a precision landing on a platform is a critical next step toward realizing the vision of a reusable rocket.

“Executing a precision landing on an unanchored ocean platform is significantly more challenging,” the company wrote in a blog post. “The odds of success are not great — perhaps 50% at best.”

Among the challenges: Slowing the 14-story rocket enough while keeping it upright, a task SpaceX describes as “trying to balance a rubber broomstick on your hand in the middle of a wind storm.” Plus, the spaceport platform is small, only 300 feet by 100 feet. Hitting the bullseye on this first attempt is a longshot.

Yet conducting such experiments, and learning from their likely failure, is a part of the learning process, the company says.

Space enthusiasts can tune in and watch the action right here: