August today announced Connect, a new hardware device that enables a persistent connection via the Internet to its Yves Behar-designed Smart Lock.

August Connect, which is available for preorders today, will begin shipping in mid-February, the San Francisco company said. The new device makes it possible to communicate with the Smart Lock remotely via the August mobile app. Until now, it was only possible to do so when within Bluetooth range of the lock — about 33 feet.

The company also announced that the Smart Lock can now connect with Nest’s smart thermostat.

The $249 Smart Lock, one of just a small number of connected locks — others include Kwikset’s Kevo, and Lockitron — on the market, lets owners lock and unlock their doors via a mobile app, and give others one-time or limited access to do the same.

August’s lock, and those of its competitors, make up just one category of what’s come to be known as the connected home. These days, companies ranging from early-stage startups to some of the biggest electronics firms in the world are marketing connected devices. From thermostats to smoke detectors to refrigerators, washing machines, and more, the so-called Internet of Things allows people to access their appliances and electronics wirelessly, and often, remotely. 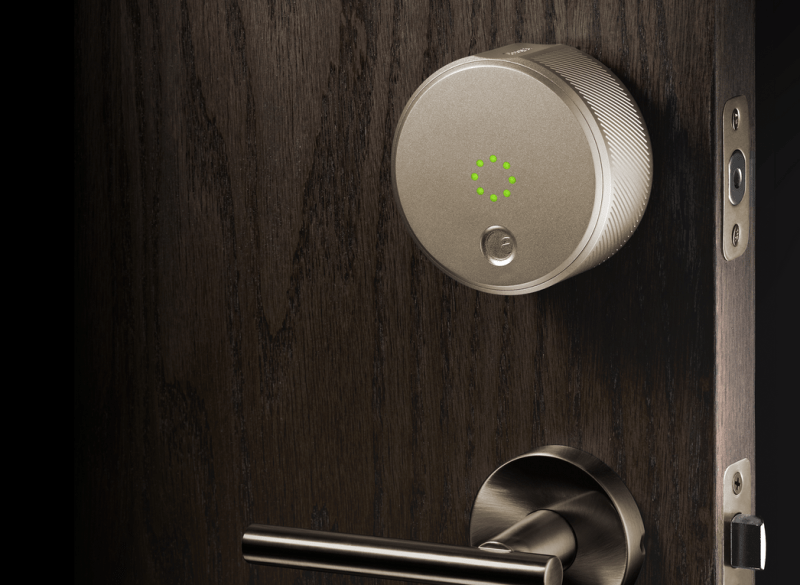 Security and battery life, of course, are issues these companies have to get right. In the case of August, for both reasons, the Smart Lock communicates with users’ phones by Bluetooth, not Wi-Fi, meaning there was no way to access the system from afar.

But with the launch of Connect, August is extending the reach of the device, making it possible for the first time to lock or unlock a door over the Internet. Connect, which costs $50, plugs into a power outlet, and creates a bridge between the Internet and the lock. It connects with the lock via Bluetooth, and with the Internet via Wi-Fi.

Like the Smart Lock, Connect was designed by Yves Behar, one of the world’s most famous industrial designers, with clients like Jawbone, One Laptop per Child, and Mini.

One of the chief selling points of the Smart Lock is that owners can assign controlled — one-time, limited, or full — access to anyone, so long as that person downloads the August app onto an iOS or Android device. But without the app, someone — say, grandma — couldn’t get in. Now, however, if grandma shows up at your door without the app, she could call you, and you could unlock the door from wherever you are. The same is true if, say, any member of the household left without their phone or keys.

August founder Jason Johnson told VentureBeat that Connect also provides Smart Lock owners a way to remotely check the status of their lock any time they want, something that wasn’t possible before.

Johnson explained that although creating a link between the lock and the Internet does open up possible security vulnerabilities, the company’s engineers have worked hard to make it “nearly impossible to hack.” He added that August had hired white hat hackers to try to crack the system, and that “my team had had a fun time playing cat and mouse with them, and winning.”

Even if someone did manage to successfully hack the system, Johnson added, it would still be unlikely that they would be able to break into someone’s home because nowhere on August’s servers are the locks associated with owners’ physical location. “If our systems were compromised, and you were able to get the proverbial bucket of keys,” Johnson told VentureBeat, “you couldn’t match them up to an address.”

Nest and the new API

At the same time as it announced Connect, Johnson said, August has also released an API allowing approved developers to make their devices interoperable with the Smart Lock. Among the first is Nest’s smart thermostat.

Currently, Nest’s thermostat auto-detects when users leave or return to their homes, but there can be a delay of up to 30 minutes before the device is certain it should turn off or turn on. By integrating through August’s API, owners of both the Smart Lock and Nest can have their thermostat turn off or on automatically when they leave the house or return.

Johnson said August plans on carefully curating who had access to the API, given the personal security implications of operating residents’ door locks. But the company clearly believes that connected homes can benefit from more interoperability between devices and the Smart Lock.

Since first releasing the Smart Lock in October, August has sold tens of thousands of units, Johnson told VentureBeat, about what the company had expected. It has also struck a deal resulting in an August demo display in every U.S. Apple Store, albeit sometimes outside the store’s main public space. To date, the company has raised more than $10 million in funding, and currently has 45 people working full-time in San Francisco.