One of the biggest stories to emerge at the tail-end of 2014 was the Sony hack that brought one of the world’s biggest companies and brands to its knees — for awhile. Eventually, Sony shrugged off the hackers’ threats and released the movie both in theaters and online, where it did surprisingly well.

But people may well be overstating the impact this one event will have on movie studios’ distribution models moving forward.

The cyberattack was carried out largely in response to The Interview, a Seth Rogen and James Franco comedy that depicts the murder of North Korean leader Kim Jong-un. Sony initially shelved the film’s Christmas release, due in part to movie theaters’ fears of reprisals, but Sony u-turned on that decision after mounting public and political pressure.

While some have posited that the Sony hack may have been an elaborate marketing hoax, it’s pretty clear that wasn’t the case. In fact, that’s a preposterous, cynical allegation.

With the debacle spiraling into a political affair — President Obama even weighed in — Sony finally released the movie in North America on Dec. 24, and online services such as YouTube and iTunes played a pivotal role in the film’s distribution. Sony’s YouTube subscriber numbers tripled in the wake of the film’s release.

Yesterday, CNN reported that the Seth Rogen comedy had been rented (for $6) or purchased (for $15) 4.3 million times since its release online back on Christmas Eve, though those numbers only accounted for activity through Jan. 4. The figure has undoubtedly climbed higher in the past few days. Moreover, Sony stated that the movie has garnered $31 million in streaming revenues, with Sony adding that it was its top-performing movie online ever.

While most big movie theater chains had caved in to terror threats made by the Sony hackers, some smaller cinemas have aired the film, which has garnered around $5 million in box office proceeds. 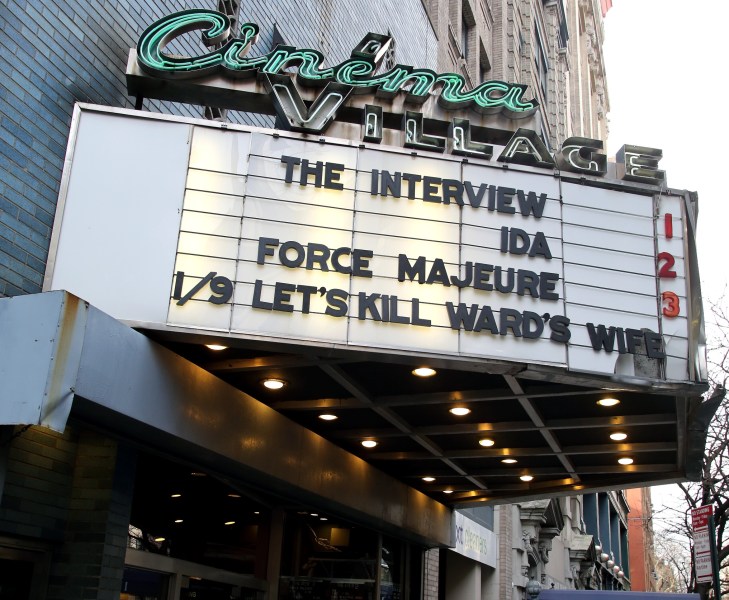 So we can probably assume that The Interview has made around $40 million at the time of writing (including the last three days) — with most of this stemming from online sales.

While these numbers are impressive on the surface, some detractors have pointed out that The Interview actually cost $44 million to make and at least $35 million to market, which means it’s still not anywhere near making a profit. But these criticisms are perhaps somewhat premature, especially when you consider the movie hasn’t been released outside of North America yet.

Sure, The Interview would’ve made a lot more money had it been released in cinemas over the festive period, but even if the film never makes it to mainstream movie theaters in the U.S. — which looks likely — it could easily still make hundreds of millions of dollars once it rolls out globally. It was confirmed today that The Interview will receive a full nationwide theatrical release in the UK on February 6, so there’s a lot of money to be made yet.

However, this whole episode led to much debate in the past few weeks, around whether this proves that the “theatrical release window,” where cinemas gain exclusive access to new movies ahead of any other channel such as video-on-demand (VoD) or DVD, is no longer relevant in today’s uber-connected digital world.

The theatrical release window has already gotten smaller in recent years, falling from an average of around five months to four months in the past couple of decades. DreamWorks Animation chief Jeffrey Katzenberg recently predicted a three-week window within 10 years.

But we’re already seeing this window being eradicated completely, with many examples springing up to show a growing push for a cross-platform simultaneous release date.

Back in September we reported that Ang Lee’s Crouching Tiger, Hidden Dragon sequel will stream on Netflix the same day it debuts in cinemas this coming August. And over in the U.K., a small piece of history was made last year when satellite broadcaster Sky aired a movie on the same day as it hit movie theaters. Looking further back, in 2012’s A Field in England became the first British film to launch in theaters, VoD, DVD, and TV — all on the same day.

Then there’s this often-repeated mantra that movie theater ticket sales are on the decline due to piracy and countless alternative home-entertainment options, an argument often used to illustrate why movie studios should pursue a different approach to distribution.

But is that really the case?

If we were to believe reports, cinema tickets and attendances are on perpetual decline. According to the latest figures, cinema ticket sales in the U.S. fell to 1.259 billion tickets in 2014, down six percent on the previous year’s 1.34 billion. In terms of revenues, this equates to a 5.2 percent drop to $10.35 billion in 2014 from $10.91 billion in the previous year.

But looking at year-over-year drops really doesn’t give the full picture. Many factors can influence ticket sales in any given year, including the quality of movies, state of the economy, and even the weather. It would be more surprising if there weren’t year-on-year fluctuations, which is why it’s much more helpful to analyze the longer-term trend.

Looking back two decades, movie theater attendance in the U.S. has risen and fallen slightly, but numbers largely remained in the same ballpark. Indeed, ticket sales may have fallen in 2014, but they were still higher than they were in 1995, in the days of dawdling dial-up Internet and long before Netflix, iTunes, and YouTube. We’ll perhaps have a better idea of the VoD effect in a few years time, when we’ll see if the current turn continues downward or bounces back upward.

With Sony pulling the movie due to terrorist threats, the FBI blaming North Korea, and President Obama getting involved, the whole affair became as much about patriotism as anything else, with many cinemas draping the American flag across the front of their buildings.

Then there’s good ol’ curiosity. With so much publicity generated across mainstream media, this served as stellar PR for the Sony marketing machine. Many would’ve watched it just to see what all the fuss was about.

The Interview’s release served as an interesting accidental experiment if nothing else, but the relative online success of the movie doesn’t really prove or disprove anything about movie industry distribution models. We already knew studios could release films in this way.

While the death of movie theaters may be greatly exaggerated, it probably is inevitable that the traditional theatrical window will be eroded in the coming years as technology becomes increasingly embedded in our everyday lives. But there is still a lot of money to be made from theatrical releases, particularly for big-brand movies and franchises, and there’s no real reason to suspect that The Interview will play any part in altering the major studios’ outlook on this.