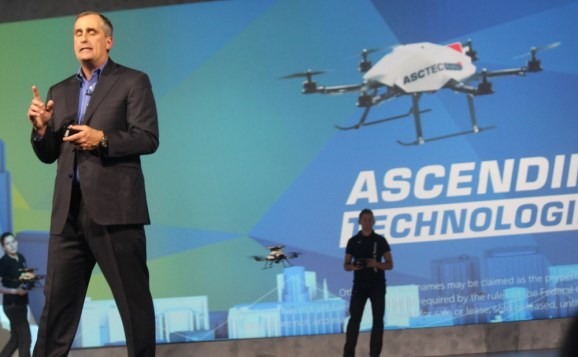 LAS VEGAS — Brian Krzanich, chief executive of Intel, gave a keynote speech at the 2015 International CES with a lot of gravitas.

He announced a plan to invest $300 million in diversity programs for widening the talent base in the tech and gaming industries. But his speech at the largest U.S. tech trade show also had its lighter moments.

In a demo of intelligent systems, Krzanich brought out a few Firefly drones from Ascending Technologies. Those drones have auto-pilot intelligence built into their systems so that they will avoid contact with humans or other objects.

One consequence of this was a demo of “drone ping pong,” where humans could nudge the drones in a certain direction by manipulating their collision-avoidance systems. The result was kind of funny, as you can see in the video below.