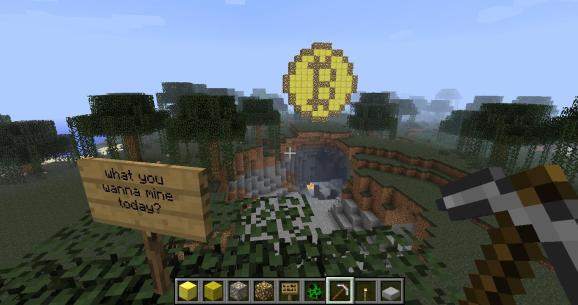 A Bitcoin emblem in Minecraft.

Fresh off a victory in a Federal Trade Commission complaint, Bitcoin mining outfit Butterfly Labs announced it will resume shipping its mining units.

The company says it will also be issuing refunds for faulty units and will start shipping units that were ordered ahead of and during the FTC complaint.

In September the FTC commission slapped Butterfly Labs with a complaint for failing to deliver Bitforce computers to more than 20,000 consumers who had already paid for them. The complaint noted that these machines can cost anywhere between $2,500 and $5,000 for a single unit. Subsequently Butterfly Labs’ operations were shut down, and it wasn’t until a month later that the company was able to gain a limited operations status.

In December, however, a Missouri district court struck down the request from the FTC to limit the company’s operations, allowing it to resume business as usual.

“The Court finds this evidence is still insufficient and does not establish that Plaintiff is likely to succeed in demonstrating the delivery date representations were false,” the court said.

Ultimately the court decided that the FTC did not have enough evidence that Butterfly Labs was deliberately not informing customers about products delays. Rather, it reasoned that according to correspondence between Butterfly Labs and its vendors, the delays were a normal part of the business.

However, Butterfly Labs is not off the hook yet. A number of customers have filed a lawsuit separately asking for refunds for delayed shipments.

Bitcoin companies often come under scrutiny because they exist in an unregulated space. Since the combustion of former Bitcoin exchange Mt. Gox, wherein a number of customers were robbed of their Bitcoin, cryptocurrency has developed a bad reputation for being risky and highly volatile. It doesn’t help that the price of Bitcoin dropped 70 percent in 2014. But Bitcoin evangelists are still at large. To combat some of the unpalatable associations with Bitcoin, a number of Bitcoin companies (often run by former Wall Streeters) are putting an emphasis on running profitable, transparent, and consumer-friendly operations.

The Butterfly Labs case is interesting, because it seems to fall in between those parameters. The company doesn’t appear to run a fraudulent operation — though perhaps it’s a badly managed one. And without rules, it’s hard to judge any company’s operations.