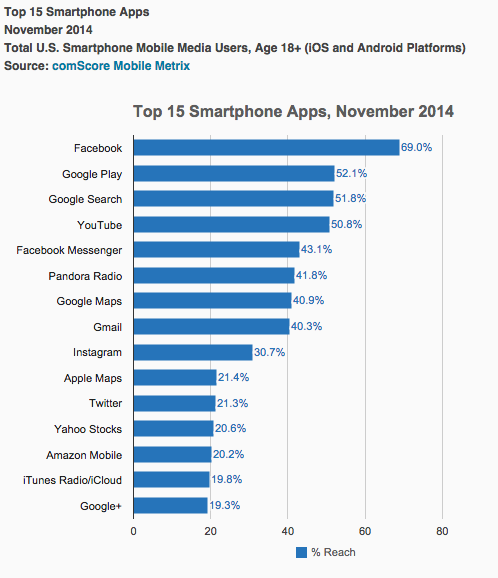 Facebook’s unbundling of its Messenger tool into a stand-alone app was a spectacularly successful move for the social media company — except for overall usage of Facebook’s flagship app.

That’s one of the main takeaways from the ComScore mobile app data report for November 2014, released today.

According to the report, Facebook’s app was the top app (by percent of overall reach) in November, at 69 percent. Its Messenger app came in fifth, with a reach of 43.1 percent. A year ago, those numbers stood at 76.2 percent and 22.1 percent, respectively.

Of course, it’s no accident that Messenger use grew so quickly: Facebook split Messenger off in August, forcing people who wanted to chat with their friends from their phones to use the stand-alone app.

The new ComScore data makes it clear that Facebook’s users consider mobile messaging a vital feature, and were willing to do what it took to keep on doing so, despite significant public hand-wringing at the time at being forced to use a new tool. By November, Facebook said at the time, half a billion people had migrated to the app.

Facebook was a big winner in the report, with Instagram coming in ninth, with a reach of 30.7 percent. Google had six of the top 15 apps, including second-place Google Play, third-place Google Search, and fourth-place YouTube, while Twitter’s mobile app lagged behind, in eleventh place, with just 21.3 percent reach.