With Hom-Bot, LG is betting that consumers want more than just the ability to clean your floors by pressing a button on a machine and walking away. And there’s some support for this logic, too. For example, iRobot’s Roomba has an active developer program that allows technically inclined customers (aka robotics geeks) to connect their robotic vacuums to Wi-Fi for all sorts of customizations and automation tasks. However,  general consumers currently can’t buy an iRobot device with Wi-Fi support right out of the box. LG aims to fix that with its Roomba rival.

But why would anyone want to connect to a vacuum cleaner remotely? Well, it looks like LG has some pretty useful applications that may answer this question. 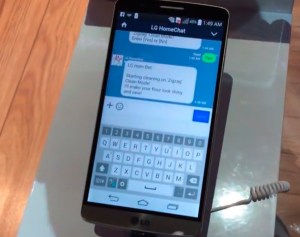 Above: LG’s Hom-Bot can be controlled via text messages.

First off, the Hom-Bot can do more than vacuum. It’s built with a front-facing camera that allows you to explore your home in a drone-like manner. Hom-Bot’s two front-facing RF cameras were originally designed to determine dust levels on the floor, but there’s no reason they can’t be used to help the device pull double duty as a home monitoring “security” droid. The idea is that when you place Hom-Bot in a high-traffic area of the house, it’ll keep an eye out and send photos of movement to your smartphone when you’re not at home.

Hom-Bot is controlled by the LG Connect app on your smartphone, which means you’ll be able to both monitor your house and clean your dirty floors during your lunch break at work. The app wasn’t available to demo this week, but we were able to see some of the functionality firsthand with Hom-Bot’s other interface: messaging. The LG Connect app allows you to message Hom-Bot with commands, and even get replies back from your Hom-Bot with various options. (For example, if you direct it to start vacuuming, it will ask you if you want to use the default or last-run vacuum mode or switch to another mode.)

Hom-Bot’s not available until this fall, which is good news because it feels like the device needs to mature a bit more on the software side. That said, robotic vacuum leaders Roomba and Dyson — which just released its own autonomous vacuuming solution (minus the Wi-Fi) — should take notice, as Hom-Bot offers compelling functionality that consumers will appreciate.

Check out our hands-on with LG’s Hom-Bot in the video embedded below.