Microsoft is moving right along in its efforts to maintain a leading position in the public cloud market. Today the company is announcing a public preview for a new service for storing cryptographic keys in the Azure cloud — and it’s rolling out the G-Series of virtual machines for running applications.

New virtual machines, each of which is a sliver of a physical server in a Microsoft data center, are par for the course in the highly competitive cloud business, where it’s only natural for computing power to increase over time.

“We offer a full hardware-protected, FIPS-certified, high-security solution, but one that scales, and one that’s easy to use and simple to program, too,” said Corey Sanders, partner director of program management for Azure at Microsoft, in an interview with VentureBeat.

Services like this, which can replace technology that companies have traditionally kept in their own data centers, could encourage longtime Microsoft customers to use Azure for their computing needs.

Meanwhile, lower prices for greater computing power can help, too.

Here are the new prices for the G-Series virtual machines in Azure, which pack as much as 6.59TB of fast local storage on solid-state drives: 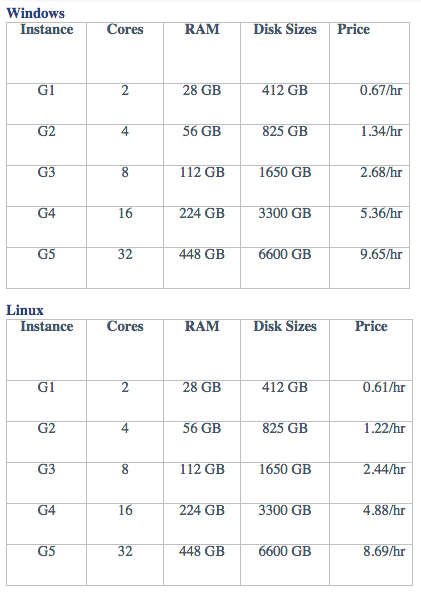 Above: Pricing for the new G-Series of virtual machines in Microsoft Azure

Microsoft is also coming out with a new virtual machine image for the Ubuntu Linux operating system from Canonical that features Docker — a trendy tool for packaging up applications in containers.

“It’s like a lot of the decisions we make in Azure — it’s based on customer requests and demand,” Sanders said.

Microsoft is not immediately announcing the availability of any other Linux operating system images with Docker support. But Microsoft has indeed committed to enabling the use of Docker-supported containers on top of the Windows operating system running on servers, Sanders said.