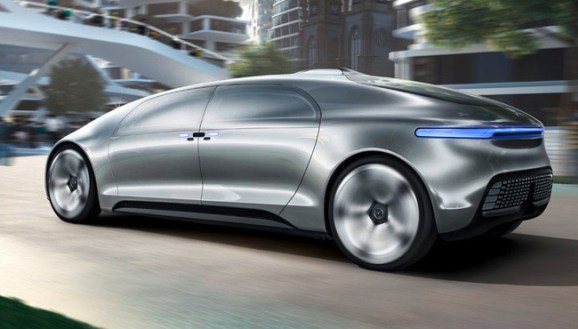 The automakers have finally found something interesting to talk about at CES. For years they’ve been droning on about how your smartphone can share music and maps with your car’s headend system — and some are still droning on about that — but this year most of the talk in the North Hall (auto tech central at the 2015 International CES) was about self-driving cars and driver-assist functions.

I am thankful for this.

The infotainment systems are important, but developers have so far struggled to find a neat way of baking smartphone functions into the dashboard. And many (like me) are getting tired of hearing about it every January. The latest story is about Apple (CarPlay) and Google (Android Auto) undertaking the painstaking process of making their platforms work with thousands of car models on the road. But even these flashy companies may have trouble breathing life into the car infotainment space.

In the dinners, demos, booths, and podcasts in which I participated in Vegas, everybody wanted to talk only about automated driving. So here’s what the automakers announced in that area at CES.

Audi and Mercedes win the prize for their autonomous car stories this year. But they’re mainly just stories.

Audi hauled a few journalists from Palo Alto, Calif., to Las Vegas in an A7 where no steering wheel was touched. No deaths were reported. Audi says it hopes to run deep learning routines on the data collected by the sensors and cameras in the car, making the system grow smarter over time.

Mercedes drove its self-driving car up and down the Strip, a blingy car that looked like it was designed just for Las Vegas. The car — called the F 015 Luxury in Motion (!) — will likely never hit the market, and Mercedes says it won’t sell a self-driving car until around 2030.

Ford made no announcements about self-driving cars, but said that it is currently testing prototypes of both fully autonomous and semi-autonomous vehicles. Ford formally announced a series of “experiments” it’s conducting in cities around the world regarding car sharing and parking assistance. It also announced a new version of its Sync in-car infotainment system, Sync 3.

Volkswagen showed off its new semi-autonomous driving trick — Trained Parking — in which the car learns the way to a designated parking space and parks semi-automatically under computer control. Volkswagen says its cars will soon allow themselves to be parked by the driver remotely, using a smartphone to control the car. Volkswagen’s main announcement, however, was for a touchless, gesture-based system for controlling information, entertainment, and telemetry systems in the car.

Toyota says it’ll release its first hydrogen-powered car, called the Mirai, this year. Toyota is dealing with the problem of the shortage of vehicle charging stations by opening up 5,680 patents to others in the industry that might use it to build more charging stations. Toyota says all it wants in return is to be able to use other manufacturers’ patented fuel cell technologies.

Chevrolet, having nothing better to talk about, briefly unveiled its 2016 Volt, which is scheduled to be released at the North American International Auto Show in Detroit on Jan. 12.

Ford may have the most reasonable take on the whole self-driving car thing. CEO Mark Fields told VentureBeat that his company is in no hurry to produce such a car, because the technology is still expensive, and the culture, courts, and regulatory system aren’t ready yet.

Announcing a tech product at CES and then never releasing it has become almost a cliche, and the automakers should learn from the thousands of tech companies that have done it that it doesn’t pay to talk loudly about products that are still years away from market-ready.