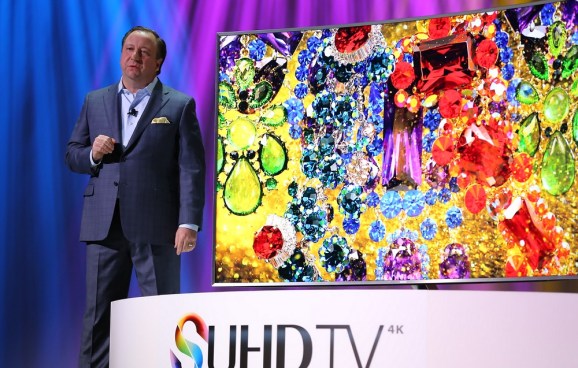 The 2015 International CES closed today with more than 170,000 attendees for the week, making it the largest show in history.

The Consumer Electronics Association said that the number was up from 160,000 a year ago, with more than 45,000 from outside the U.S. The show had more than 3,600 exhibitors across more than 2.2 million net square feet of space. Despite the large numbers, the CEA says it still curates the show so it can keep the quality of attendees high. The big categories for products included automotive electronics, personalized health care solutions, unmanned vehicles, connected devices, 3D printers, gaming, and more.

At that size, Las Vegas was filled to the brim. I know, because I was there and ran into the huge crowds. There were huge lines for the monorail, taxis, keynote speeches, and in the show floor aisles. The exhibits were loaded with high-resolution 4K TVs, as well as those that were more like 6K TVs.

I can remember when the show had its toughest most recent year, back in 2009, when the recession took the attendee number down from 141,150 in 2008 to under 130,000 in 2009. Since that time, CES has steadily recovered. But show officials don’t want it to grow too big and lose its focus. Indeed, I found the show hard to navigate, even after 18 years of going to it.

“This CES vastly exceeded our expectations. The show inspired and likely gave almost every attendee a sense that innovation will provide solutions to a range of global issues from the environment and agriculture to transportation, health, and safety,” said Gary Shapiro, president and CEO of the CEA, in a statement. “CES is the center of convergence among content, services, and products, combining to create amazing new technologies to improve our lives and entertain us. It’s been incredible to see thought leaders from many diverse communities come together for cross-industry collaboration.”

This year, the show was separated into three venues: Tech East (the Las Vegas Convention Center area), Tech West (the Sands and its surroundings), and C Space at Aria. It was easier to find the products you wanted in the Sands Expo because it was divided into categories such as wearables, 3D printers, and robotics. The Eureka Park section of the show had 375 startups, up from 220 last year.