Something inside humans makes us love gambling. Even if the wagers are only for digital money, we’re willing to put our real cash on the line to chase after that thrill.

Spending on mobile casino games on iOS was up 55 percent from November 2013 to November 2014, according to the latest report from industry-tracking firm App Annie. The market is worth $2.7 billion today, and that’s almost exclusively social-casino games in which players can’t win real money. But that’s slowly changing as countries like the United Kingdom and Australia open up real-currency gambling, and that has the digital gambling industry on a pace to reach $100 billion in revenue by 2017. For comparison, mobile gaming was only worth about $21 billion in 2014, and console gaming generates around $55 billion in spending.

While download rates for card, casino, and dice games on mobile were up slightly. App Annie found that each category saw huge jumps in revenue. 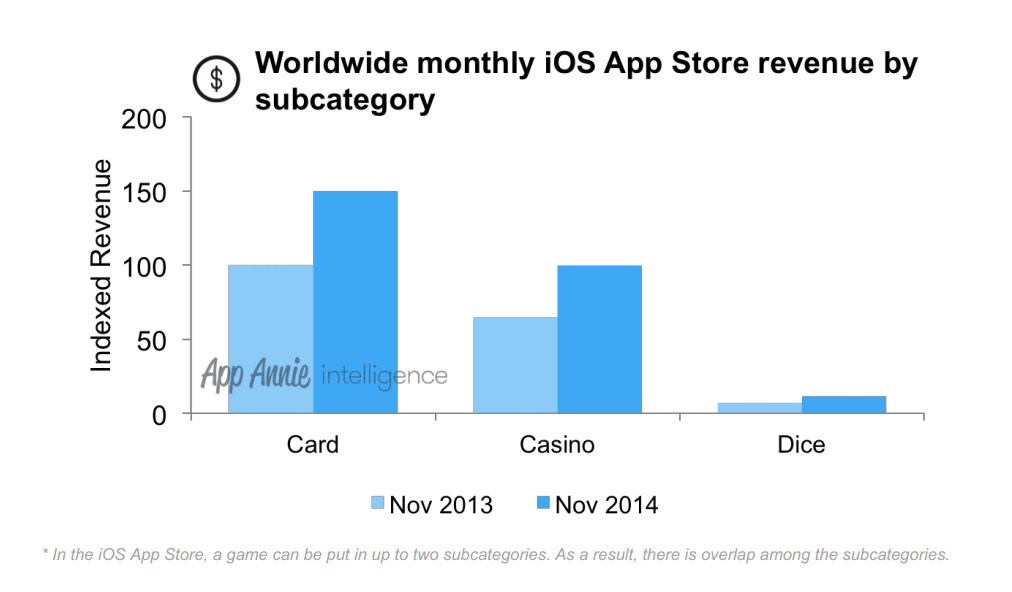 Card-game revenue was up 50 percent year-over-year to a total of approximately $150 million, and casino games saw a 55 percent increase to around $100 million.

It’s a similar story on Google Play, where the combined revenue for casino and card games was up 105 percent year-over-year.

This represents a shift in spending for the industry from web-based social networks like Facebook to mobile. But it is also a story of mobile introducing more people to these games.

“In Q3 2014, online gambling industry heavyweight PokerStars saw over 50 percent of new registrations come through mobile channels,” reads the App Annie report. “Mobile is now a key channel for expansion to new users, driving considerable growth of the online gambling industry as a whole. A prominent position in the mobile market is, therefore, likely to translate to growth in other sectors for gambling and social casino companies.”

The growth on mobile is due to the popularity of apps on smartphones. People often go in search of new games on mobile as opposed to Facebook, which most people use solely for networking.

While the casino-gaming sector is growing worldwide, the United Kingdom is one of the big reasons why so many companies are excited to get into this sector for the future.

Social-casino games are popular in the U.K., but it is one market that also has real-money gambling (along with Ireland and Australia). And that’s led to more excitement, more downloads, and more revenue relative to the rest of the world.

Downloads for the iOS casino category was up 10 percent compared to flat growth for everywhere else. For revenue, casino games saw 60 percent growth, which again outpaced the rest of the world.