SunFriend wants you to get more Vitamin D from the sun, but not so much that you get burned. So the company came up with its UVA+B SunFriend wearable device. It’s a simple device whose sole purpose is to measure your sunlight intake, particularly your exposure to ultraviolet radiation.

You turn it on and set your sun sensitivity. Then the light-emitting diode (LED) will flash when it knows you’ve had enough Vitamin D, which has known benefits, such as lower blood pressure and a lesser risk for heart disease. If the dial fills up with indicators, then you can be pretty sure that you’re getting a sunburn.

The Washington, D.C.-based company displayed its wares at the Eureka Park startup section at the 2015 International CES, the big tech trade show this week in Las Vegas. The company launched the product quietly on its website and on Amazon.com a few months ago. It will be in Best Buy stores soon.

“People are not often aware they’re burning,” said Karin Edgett, cofounder of SunFriend, in an interview with VentureBeat. “If you are not wearing broad-spectrum sunscreen, you could be at risk for burning.”

“A recent paper showed that if people get enough Vitamin D, they could knock $129 billion off the annual health care costs in the U.S.,” Edgett said. “That’s a lot of costs.”

Edgett, a former advertising and creative guru, and Shahid Aslam, a NASA scientist, started the company in 2011 to combat the epidemic of skin cancer, which affects one in five people in the U.S. Their idea won first place in the NASA Tech Briefs “Design The Future Contest” for consumer products category as well as the “most popular” vote.

The waterproof wearable has a UV sensor, which takes a reading from your environment every few seconds. You can take it to the beach or whenever you’re outdoors at pools or golf courses. SunFriend recommends you get a healthy amount of sun, and then choose to cover up properly, go indoors, or use a “safe and organic” broad spectrum sunscreen to avoid overexposure to sun, which could lead to skin damage.

Vitamin D deficiency now recognized as a big problem. Scientists at the University of Edinburgh discovered that when sunlight touches your skin, nitric oxide, a powerful blood pressure lowering compound, is released into your bloodstream. It helps you get a better night’s sleep, and it lightens your mood. SunFriend costs $50. The company is looking for funders and distributors. 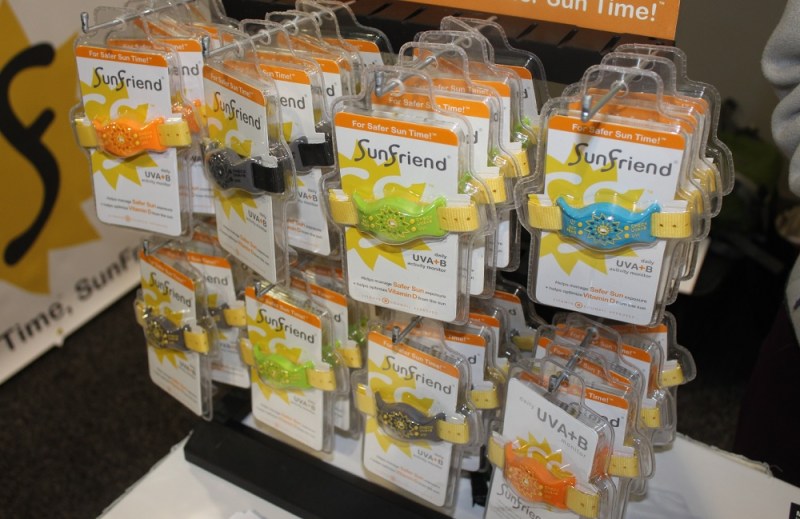 Above: Sunfriend protects you from sunburn.