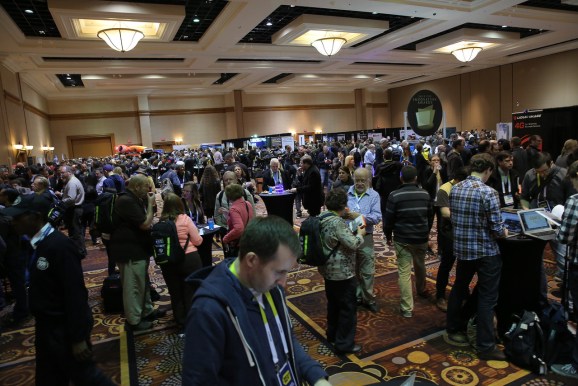 Sure, you can spend your time marveling at the latest “smart” devices announced at this week’s 2015 International CES that gather data and connect to the Internet — from the next-generation plant-hugging Parrot Pot to LG’s connected vacuum cleaner. For Shawn DuBravac, a CES veteran and consumer electronics analyst, that’s to be expected. He’s personally more interested in thinking about what’s useful.

“We’re in an environment where we’re more focused on things being technologically meaningful. We’re no longer focusing on, ‘Can we do this?’ We’re focusing on, ‘Should we do this, and what should it look like?'” said DuBravac, chief economist at the Consumer Electronics Association, the organization that puts on the big tech trade show in Las Vegas each year.

DuBravac has a book coming out on Monday, “Digital Destiny,” which discusses the impact of all sorts of objects becoming digitized, outfitted with sensors, and connected to the Internet. Things can get more personal, quantified, or automated. Not every device will have an enormous effect on society — indeed, some will flop, while others could meet the needs of a certain group of people. But little by little, some of these devices will develop greater capabilities, and people could start to accumulate them. That’s where things can become more interesting.

For instance, at this year’s CES, DuBravac came across a system that tells you how much you’ve got left in your propane tank, and how quickly you’re burning through it. The information could show up on your smartphone.

That sort of alert on its own could be helpful for those who do lots of propane grilling, DuBravac said. But over time, he expects devices to connect with other devices and services and, over time, start to offer predictive recommendations, not just information on events that have already happened.

For instance, movie recommendations could become better when connected devices are feeding data into a recommendation system. A Dropcam might be able to determine how many people are inhabiting a room and whether they’re sitting or standing. And data from connected lightbulbs could be brought into consideration, too. Maybe weather could play a role as well.

“They might look at you and say, ‘Hey, Shawn, we see you’re home alone, the lights are dim, it’s cold, you seem to be depressed or anxious,” DuBravac said. “‘You’re lying down. Here’s a movie you wouldn’t normally like. It deviates from your historical patterns but really fits this situation well.'”

Networks of these connected devices could also be good for your health. In his book, DuBravac sketches out the upside of a connected refrigerator and a connected scale:

The scale relays your weight trend to the fridge, which, knowing your weight loss goals, warns you that the chocolate cake you’re about to remove won’t help you reach them. I envision my fridge yelling at me with the tone of a boot camp drill instructor.

It’s funny, but it’s not that hard to imagine such a suggestion, which wouldn’t be possible without the data that these devices can generate or the calculations that can be performed automatically. That’s one kind of result of the revolution of connected devices that should play out over the next few years.

Meanwhile, with consumers’ adoption of connected devices increasing, some device and app makers are trying to ascertain what they should — or shouldn’t — do with the data they can access.

So a company behind a running app that knows you typically run 50 miles a week but suddenly stop running might conclude that either you got tired of the app or, perhaps, you were injured. The company could surface information about the best way to recover from an injury and prevent further injuries in the future. But some are hesitant now, DuBravac said, “because they don’t necessarily want to let you know that they know this.”

The market will reveal which devices and services can help people, and which ones just might go too far. And for those technologies that stick around, whole new risks can emerge.

Take for example a Volvo that DuBravac saw at CES that connected to a bicycle helmet. If a car comes close to the bicyclist, the helmet flashes. And the car can be directed to stop or go forward based on the actions of the bicyclist as well. Moral hazard could become a factor in this scenario.

“Those are all things we have to explore and sort out,” he said.