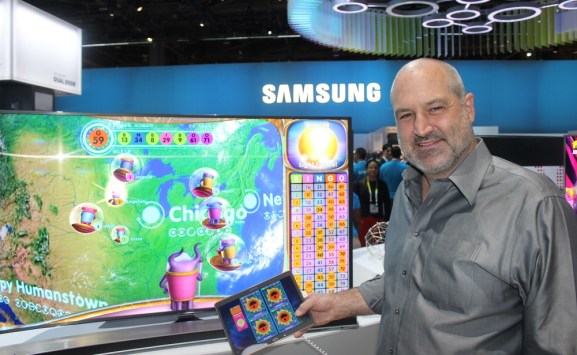 Playsino CEO Alex Kelly in front of Bingo Home on a big Samsung TV at CES 2015.

Playsino will launch its Bingo Home on Yahoo and Samsung’s line of smart TVs. It’s a regular bingo game that is based on the movie Home, an animated film coming this spring from DreamWorks Animation.

The company did the deal in a licensing partnership with Bonanza Media and DreamWorks Animation. Both Yahoo and Samsung are distribution partners for the game, said Playsino chief Alex Kelly in an interview with GamesBeat at the 2015 International CES, the big tech trade show this week in Las Vegas.

“It’s designed to be a family-friendly game,” Kelly said. “You can all have a second-screen experience. It’s a fun angle.”

The deal will give some good awareness to Playsino, as the DreamWorks film is a major release with voice actors including Rihanna, Jim Parsons, Jennifer Lopez, and Steve Martin.

Playsino has under 20 employees. It has also published Bingo World, Bingo USA, Holiday Bingo, Playsino Poker, and Solitaire and Prizes.

Bingo Home comes out on Feb. 1, while the movie debuts on March 27.

It has two modes. The game mode is similar to Playsino’s existing bingo games, where you play bingo through a series of themed rooms and collect virtual items along the way. It has power-ups to accelerate gameplay and special items to win throughout the game.

With the race mode, you have a two-screen experience where players pair their personal devices to a connected TV and race up to 10 players in their spaceships to a destination on Earth.

Players progress their ships on the connected TV second screen using unique bingo cards on their personal device. The game has unique power-ups that advance the player more rapidly and some can be used to slow your competitors down.

Our technology platform allows us to create this real-time multiplayer two screen experience anywhere in the world. You can have your family in your Los Angeles living room playing relatives in any other location in the world and you will see the same race action on each TV. It is a great way to stay connected and play games with your extended family.

I happened to waltz by just as Samsung Electronics America president Tim Baxter walked by on a tour with Jeffrey Katzenberg, the CEO of DreamWorks  Animation. They paused in front of the game and talked about it for a while. 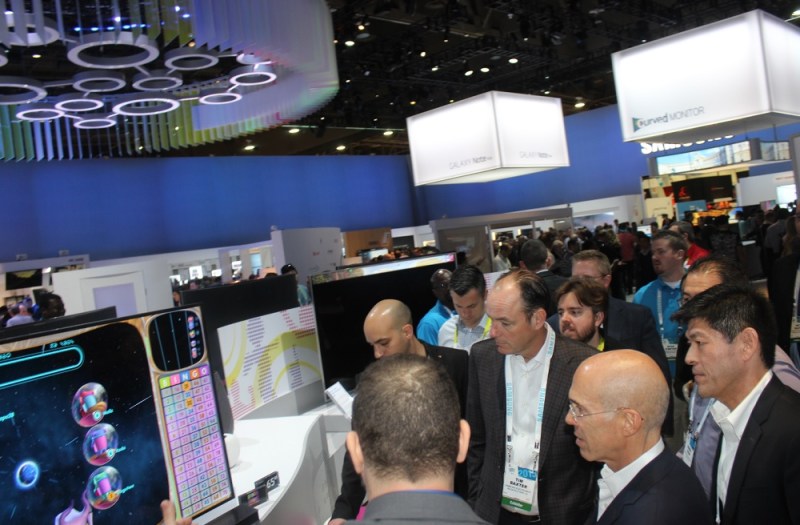