[Update: AMD announced John Byrne has left the company to pursue other interests — 1/12/15]

John Byrne has a tough job. As senior vice president and general manager of the computing and graphics business group at Advanced Micro Devices (AMD), he has to go head-to-head against Intel, the world’s largest chip maker. That means AMD has to be more focused and selective when it comes to designing its computer processors and graphics chips.

AMD isn’t doing much in the Internet of Things (IoT), which is Intel’s major expansion area. But Byrne notes that the PC chip market is still a $40-billion-a-year opportunity. He said that AMD has to execute on its upcoming Carrizo family of accelerated processing units (APUs), which will be focused on the mobile-computing market. About 300 million PC processors and 90 million graphics chips are sold each year, and Byrne wants AMD to get its fair share of those sales.

“I’m not in the business to lose money,” Byrne said, in reference to whether AMD will go into the Internet of Things chip market.

But Byrne does believe that virtual reality is just the beginning of a whole new wave of demand for computing products in the future.

We caught up with Byrne this week at the 2015 International CES, the big tech trade show in Las Vegas. Here’s an edited transcript of our interview with Byrne. 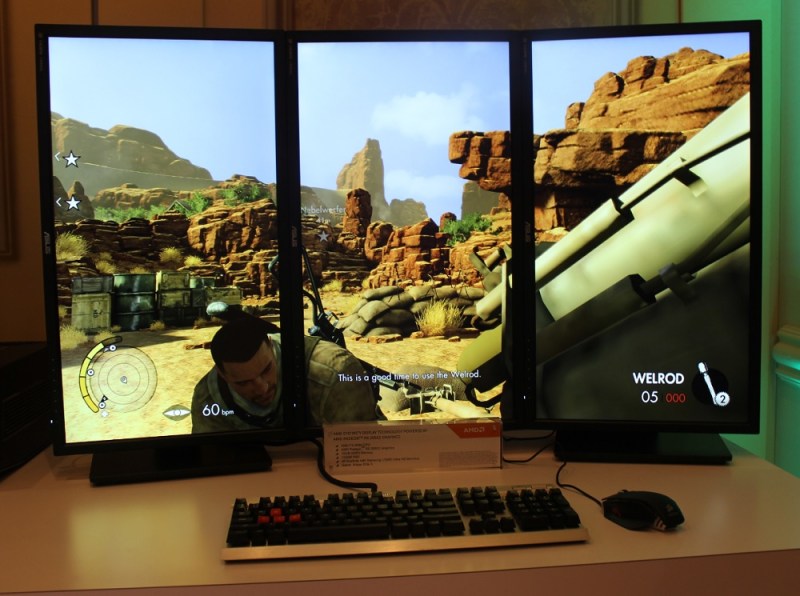 VentureBeat: How are things here at the show for you?

John Byrne: It’s great. It’s a bit crazy busy. I got here this morning, and you’re the ninth person I’ve met since then. But it’s always good to be in Vegas. I remember when I first used to come here. I had chances to tour the show constantly. Nowadays, that happens less and less. People just want to meet and meet, which is a good thing. This show and Computex are probably the two critical shows for me.

VB: What are you running at AMD?

Byrne: I’m an SVP and general manager of the client and graphics business unit. I’ve been in this role for five months now. Prior to that, I was AMD’s chief sales officer, and before that, I ran the global accounts — HP, Dell, Apple, Lenovo. Prior to that, I ran the channel and then the graphics sales and marketing team. My responsibility now is for sales, marketing, and platform engineering to bring all of our client and graphics parts to the market.

VB: How many years has that been at AMD?

Byrne: As I was going through that, I realize it’s been eight years, as of January 3. I had my own companies before. As you can tell, I’m not from Austin. I was based in London. I was fortunate that AMD acquired my company, and so I joined in 2007. That’s frightening.

VB: What are some highs and lows during that time?

Byrne: There have been lots of highs. I know you follow AMD and write a lot about AMD. There are some wonderfully talented people at AMD. It’s inspiring to wake up every day and be working with smart people. Not long after I joined, the acquisition of ATI happened. There was a lot of excitement in the marketplace. I remember when we brought Orochi [processor] to the desktop. But for me, I think when we started to really talk about our APU and bringing Brazos to the market and the vision of our APU. We were gaining share in the value space super fast.

There’s the work that we did resetting the company, with the three-step approach. The acceleration a lot of people talk about. The game console wins were significant highs. I think the Hawaii [graphics chip] launch was super high. I don’t think anyone anticipated how well Hawaii products were going to perform in the marketplace. Those are some of the highs that I’ve enjoyed.

Our execution on our server roadmap was a bit of a low. Llano could have been better. But AMD is a challenging, but inspiring, place to work.

VB: Going forward, what are some of the more focused areas you guys are excited about?

Byrne: I don’t know how well you know the restructure we had. We created these two uber-business units, client and graphics. There’s what I call the classic, traditional AMD, and then you have the ESE. When I took over this business group, they were two individual business groups. They had talented leaders, but they were individual in thinking on the roadmap, individual in thinking on our ISV [independent software vendor] strategy, our benchmarking strategy, our go-to-market strategy.

One of the reasons we pulled these two business together is we believe there’s significant synergy between their products. If I believe the future of [computing] is gesture and touch, and then VR and AR and immersive reality, it leans heavily into a graphics and client roadmap. I collapsed the businesses into one, very quickly. I set up a new product leader. That product leader now has someone who’s focused on client and someone who’s focused on graphics. We’re driving to clear accountability into the marketplace. I centralized our product marketing, centralized the go-to-market, so we had a consistent message. I also centralized a lot of our sales function and our benchmarking team. I centralized a lot of our ISV team.

We spoke a lot about [AMD’s application programming interface] Mantle. Mantle is important, but it’s ultimately what experience you want your customers to enjoy. Mantle is allowing you to execute to that and works with the relevant games … to get there. Where we could do better is ensuring that we’re enabling the relevant experiences and solutions. The hardware is critical, but do you have the software, the ISVs? Do you have the platform off in the market? Centralizing my ISV engagement has been critical. 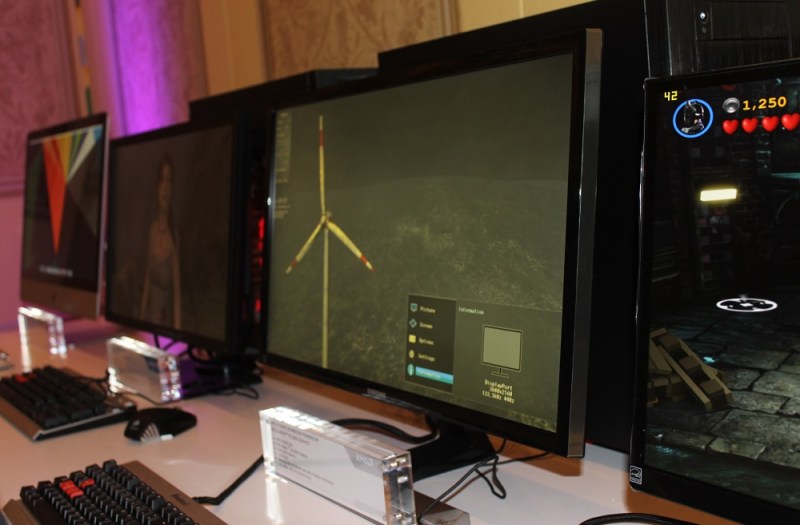 Above: AMD-powered gaming computers at CES.

VB: I look at Intel and their shift into things like IoT and wearables and the small Quark chips. They seem to be doing so much more of the work that their customers used to do. I wonder how you guys can either adapt to that or learn some of the same things but on a smaller scale or in a more focused way.

Byrne: They have jumped to Quark and IoT, but even if I look at the classic PC market for a minute, there’s still 300 million PCs, still 90 million graphics chips. If I look at Intel, Nvidia, and my revenue, that’s still a $40 billion market — even before you get to the IoT. If you look at the gross margin profile of that business, it’s still significantly more than AMD as a company’s average. There’s still significant market opportunities in the classic PC space.

There are some things we have to do well there. We have to continue to work on our x86 performance, ensuring that each product we bring to market is better x86. We have to maintain our graphics leadership. For notebook, we have to ensure that we’re driving to improve battery life. We’ve done well, but I think if you look at Carrizo, it’s a quantum leap for us in terms of power efficiency. Those are table stakes. It allows us to play in the segment — attacking i3, attacking i5. Again, i5 is a quarter of the market.

I believe that we have not historically played in commercial. We’ve won the industry’s largest single tender in commercial 18 months ago in India. We won Elitebook … with HP last year. Wait until you see the lineup of commercial platforms I have with Carrizo. It allows us to continue to attack that i3, attack that i5 consumer, and really get to penetrate the commercial market space. We’ll attack graphics. That’s going to be my strategy next.

Of course IoT is important. The question that you and others are asking is, hey, if you have a wearable, there are two ways to make money from it. One is the silicon inside the wearable. That’s under $10. You’re seeing that with Quark and some of the other investments our competitors are making. I’m not in business to lose money. Share and revenue is nice but so is profitability.

All of those devices have to be connected. I believe that we can have an answer on IoT, be it through data center or storage, to enable IoT. That’s what I see us going after. The low-cost pieces of silicon in IoT our competitors seem to be doing are not part of our strategy.