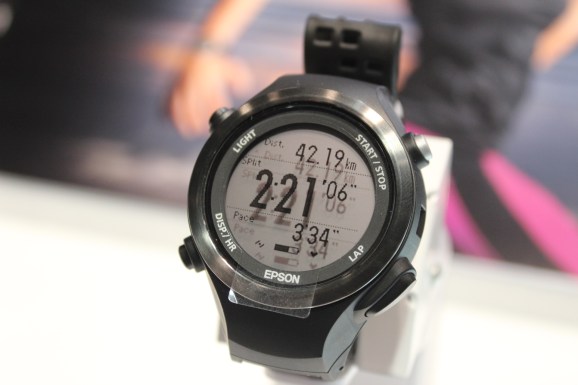 LAS VEGAS — Epson is one of a number of big brands we saw at CES looking to get in on the wearable craze, announcing a new fitness watch last week.

It’s actually a line of three slightly different running watches, collectively called Runsense. The Runsense SF-810 — the one Epson was showing at CES — acts a lot like a stopwatch on the wrist, with an accelerometer and heartbeat monitor added in.

The visible-light heartbeat sensor is located on the back of the watch and monitors heart rate continuously. There’s also an accelerometer inside, a GPS radio, and algorithms to give runners a constant look at performance levels during workouts. The watch is supposed to be able to calculate the length of the runner’s stride, too, and factor that into its calculations.

The watch looks like it would be heavy and unwieldy, but it actually felt light and manageable on my wrist.

Tthe Runsense watches get into some very detailed metrics for serious runners. In all, the watch tracks 35 measurements, including time elapsed, distance, pace, laps, intervals, speed, and calories burned. 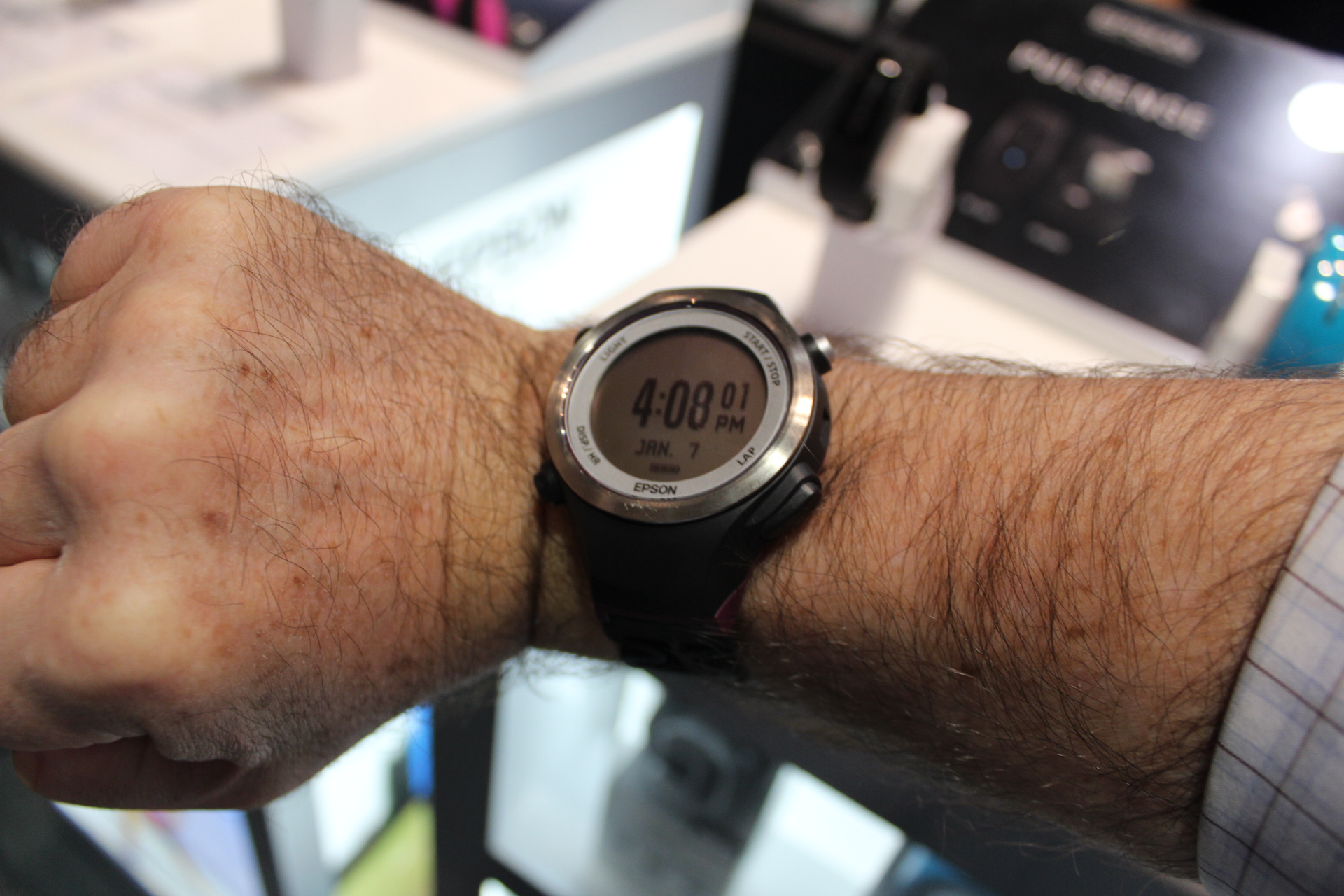 My only real problem with the Runsense watch was the read it took of my heart rate. I was in a reasonably relaxed state, yet the watch measured a BPM of 90, well over the 65 or so BPM I usually log. 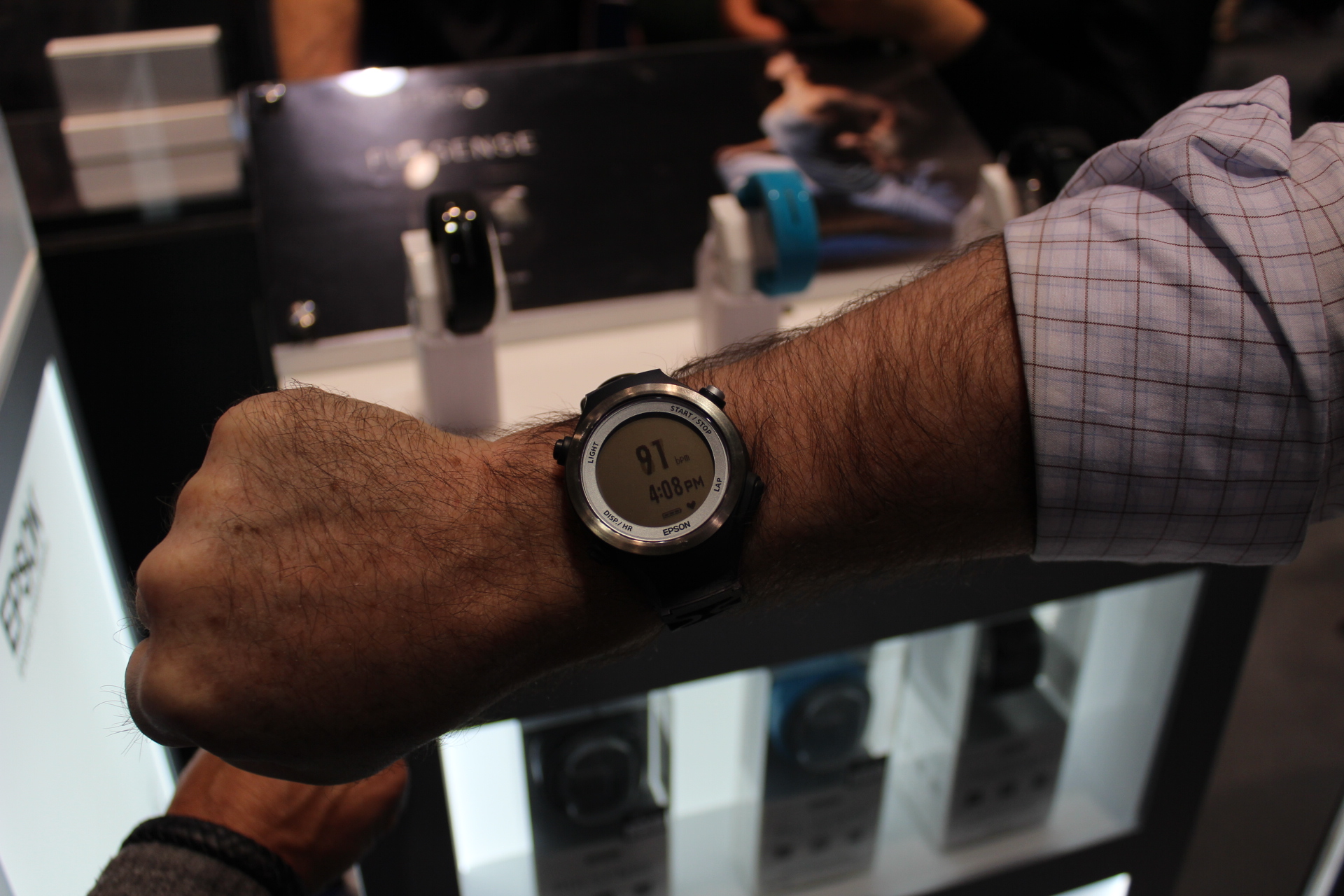 Many runners’ watches rely on a chest strap to get an accurate heart rate reading, and some people I’ve talked to in the health industry say they are skeptical of the accuracy of wrist-based sensing. 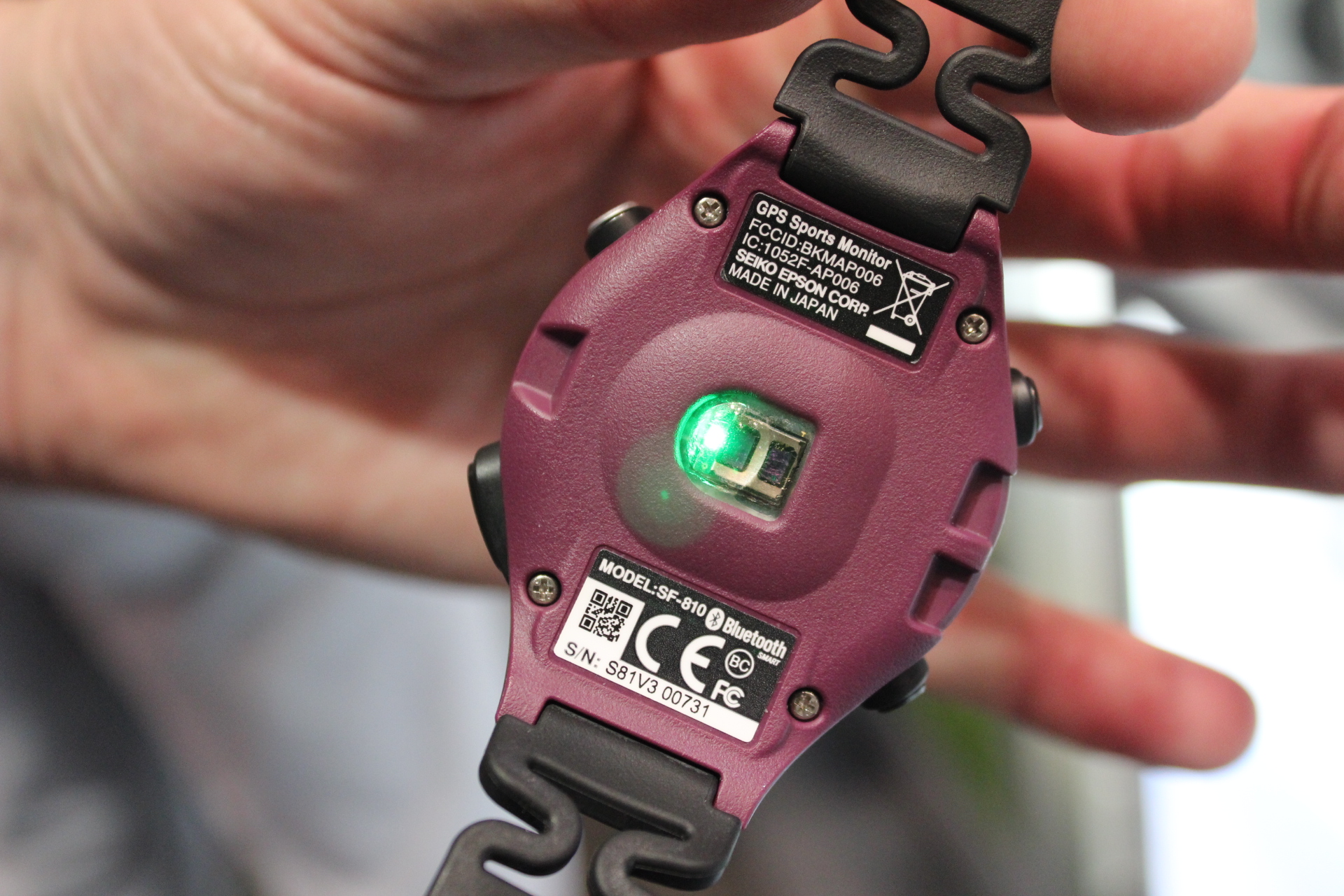 Two of the buttons on the watch — the Start/Stop and Lap buttons — are dedicated to stopwatch functions, while the Display/Hour button toggles the data on the screen and the Light button turns on the backlighting so that the watch face can be seen at night. 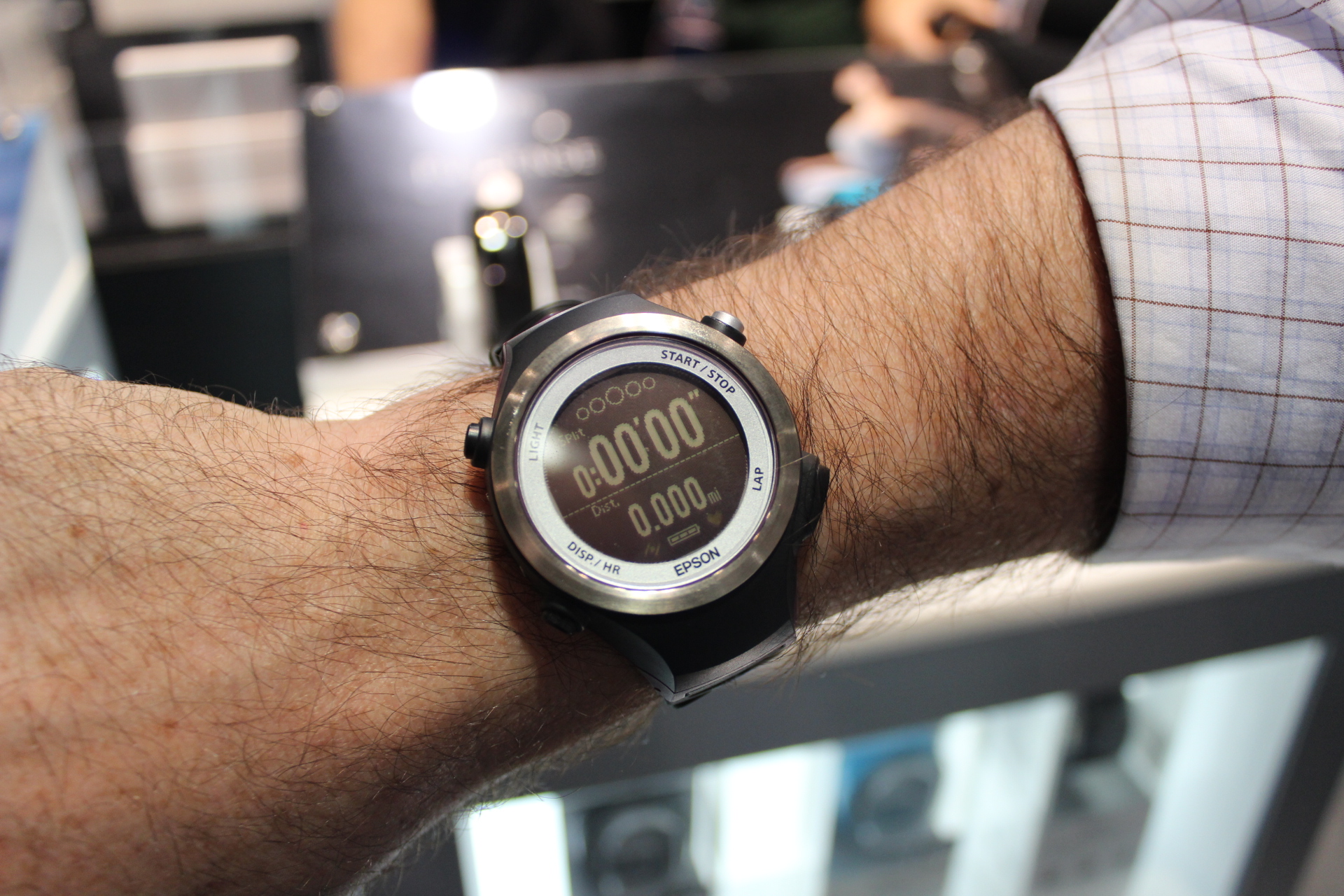 Here’s the Runsense watch with the backlight turned on. 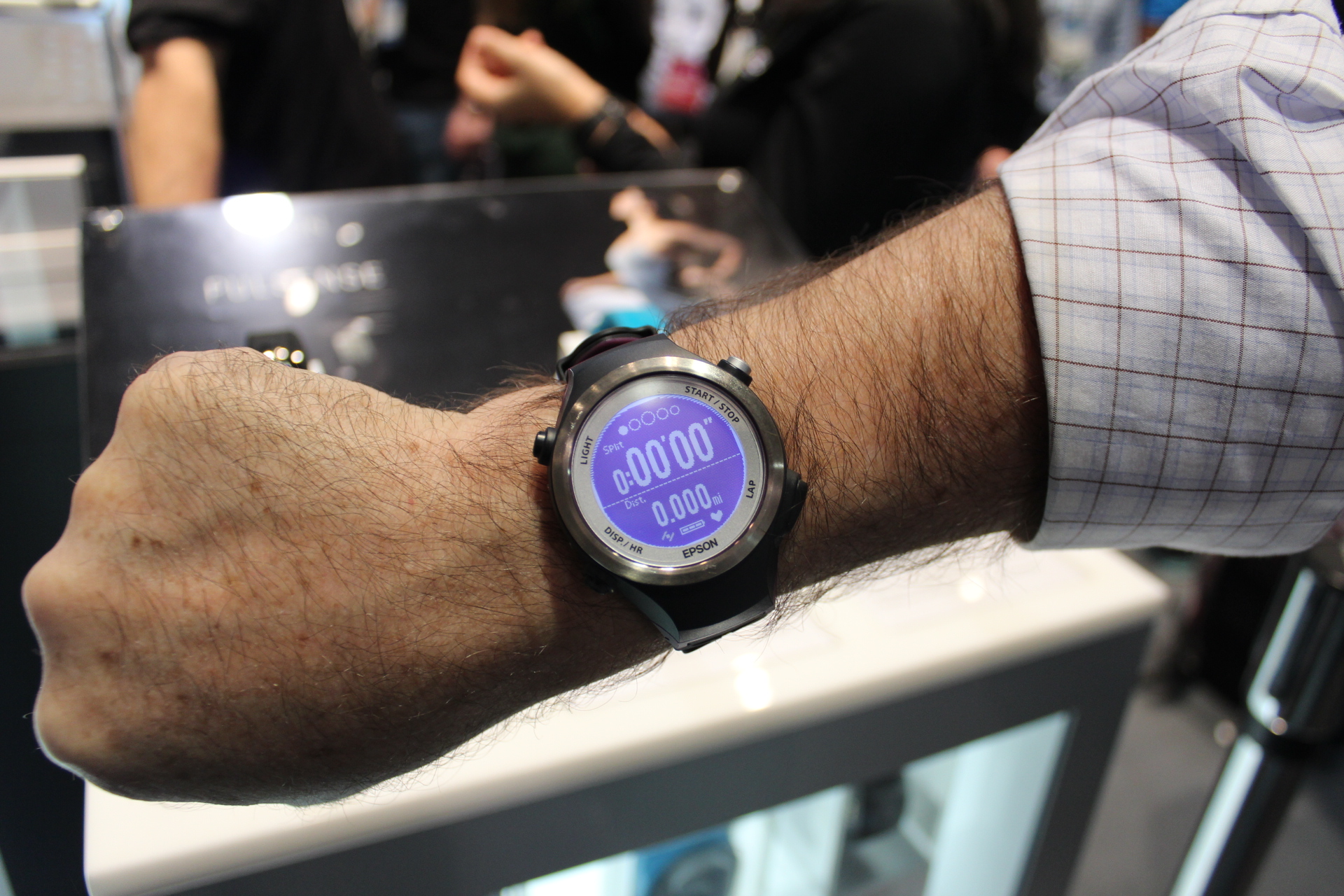 While I didn’t have time to jog around the convention center testing all the timing features, I have no doubt they work fine. One thing I liked about the watch was the sheer number of data points that you can see by looking down quickly at its face.

I’m not a serious runner, but for those who train by running laps and timing them, the watch is a nice tool. A capacitor inside the watch gives the runner’s wrist a little buzz when his normal lap time has expired. The watch can also be set to vibrate when the wearer is getting close to a workout goal (number of laps) he’s set in advance.

The Runsense watches can sync with an app running on smartphones, tablets, or computers using Bluetooth.