Box will finally hit the public markets this year, after updating its S1 and launching its roadshow last week.

The offering wasn’t all that impressive, as Box valued its business at around $1.5 billion — about two-thirds of what it was worth in July.

Some of Box’s biggest critics argue the lowered valuation is due to the nature of online storage business: it’s increasingly becoming commoditized, with industry giants Amazon, Microsoft, and Google all slashing prices nearly to zero.

For the last few years, Box has been making huge efforts to build out a developer platform on which companies can build all kinds of apps. Those apps will probably use Box for storing data and files, sure, but they’ll also do a lot more.

For example, Box is HIPAA-compliant, allowing doctors to share and review x-ray results without violating any regulations. Or a drone company could use Box’s API to build an app where it could automatically save images it takes with a drone.

The strategy seems to be working: Box has partnered with companies like Salesforce and Oracle, and currently has more than 1,300 applications built on top of its API.

This slide from Box’s roadshow perfectly captures how it works. 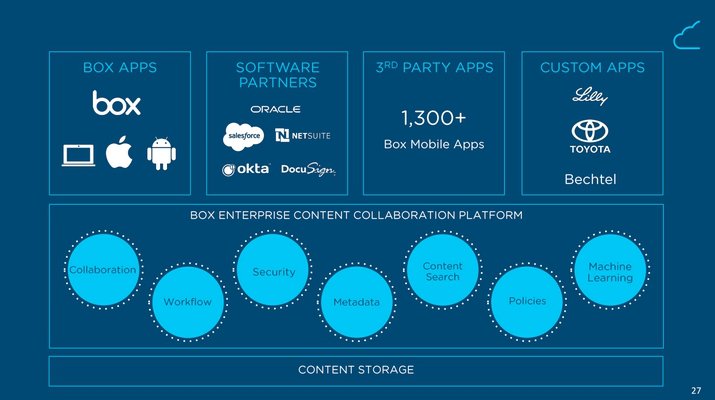 Above: This slide from Box shows how it plans to expand beyond mere file storage.

In an interview with Business Insider, Box CEO Aaron Levie said he knew storage business was going to turn into a commodity business back when he first started the company. Instead, he said he’s creating a platform business, where more value is added on top of things like storage, computing, and security.

If the critics are right, Box is doomed. If Box is right, it has a chance at being a valuable enterprise company along the lines of Salesforce.