Aside from wearables, no other sector of gadgets seemed more present at the 2015 International CES than connected home electronics.

While some pushed back against this trend with high-end consumer appliances that lacked connectivity, VentureBeat saw companies ranging from startups to venerable electronics brands move into this space. And it makes sense. CEA reports that while only 10 percent of consumers own a wireless multiroom audio product, 44 percent want to own one. Also according to the CEA, structured wiring, security, and home theater technologies dominate the top electronics categories for the home.

We surveyed dozens of connected home technologies throughout the week at CES 2015, talking to their leadership and spokespeople, and getting hands-on time whenever we could. Here are our top 5 favorites. 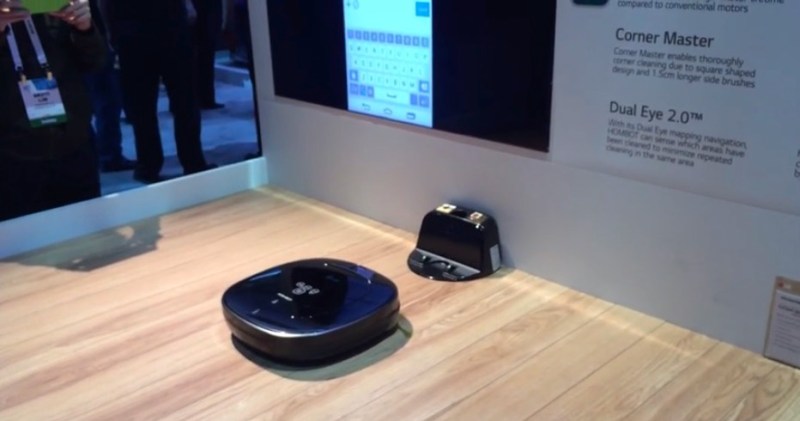 Above: LG’s new Hom-Bot connected vacuum should give Roomba a run for its money.

We’ve already introduced you to this friendly automated sweeper. While we’re still a ways away from the Jetsons’ cybernetic cynic Rosie, LG’s Hom-Bot manages to deliver on key pieces of the connected home mantra.

Hom-Bot’s scheduling functionality is easy to set on an app. The device includes premium features like two front-facing RF cameras that help it detect dust, two rotating brushes that allow it to pick up particulate matter regardless of which way it’s oriented, notifications when its dust bin is full, and, most intriguingly, soft-security/ surveillance functions. When in the proper mode, users can remotely control the Hom-Bot and have the front-facing wide-angle camera snap and send photos to its master’s mobile phone — perfect for catching the person who’s pilfering from the cookie jar.

Hom-Bot isn’t a comprehensive connected home solution, but it’s a solid start. While LG has yet to release prices for Hom-Bot, later this year consumers will be able to pick up a reasonable autonomous vacuum that has fun and informative connected features. Unlike so many soft surveillance cameras, Hom-Bot also isn’t limited to a single vantage point. Once the device notifies its owner of a potential security problem on one area of the house, that user can take over and follow the intruder around the home… unless they go upstairs. Hom-Bot doesn’t do stairs. 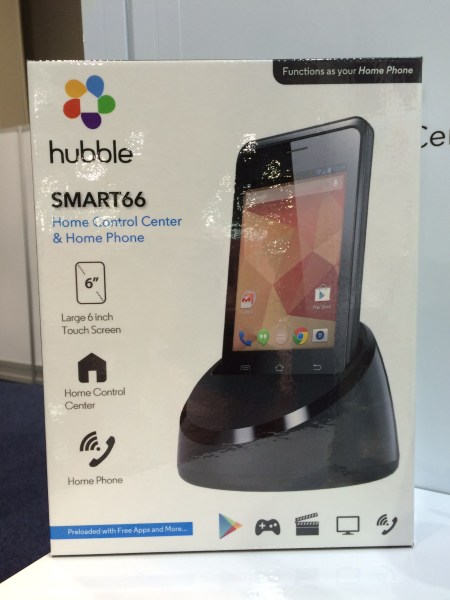 Motorola, working with European electronics manufacturer Binatone, offered some promising value at CES. Motorola’s connected home strength has traditionally rested in their network-focused baby monitoring products. They’ve got a lot of experience in this area and make it pretty easy for consumers to hang out in one room while keeping tabs on sleeping infants and toddlers in another.

While others in this space can also offer night-vision cameras to watch kids, Motorola and Binatone are interested in giving users insight into how their babies sleep. Their vision is focused on recording the rate of movement during naps and after bedtime in order to deliver to caretakers data that can inform them about the actual quality of the children’s sleep. By logging this data over time, patterns can emerge, giving parents insight into what they can do to help baby sleep better.

Also displayed at CES were Motorola’s multipurpose pet tracking devices for both dogs and cats. These collars maintain a pet’s-eye view in real time over cellular, control barking and meowing with vibrations, and track animal locations via the aging GPRS protocol. Aside from Petcube, Motorola was the only CES exhibitor VentureBeat saw in the pet space.

Taking the above into account, what may make Motorola stand out most in the connected home is what they’re calling their Hubble layer. Hubble, a subsidiary of Binatone, is a company focused on creating an aggregated experience for connected home devices. Make no mistake, the space they’re playing in is crowded. When Hubble launches in the U.S., it will compete with GE’s Wink, Belkin’s WeMo, Staples Connect, and Nest’s Revolv, among others. Just like these competing hub platforms, Hubble will be launching its own hub device that takes in commands from an app or website over Wi-Fi and then translates those commands through a number of protocols like ZigBee and Zwave.

There are two key differentiators here. The first is that Hubble’s hub device doubles as a dock for a wireless Android handset, which allows users to interface with their connected devices while also answering phone calls from their Bluetooth-connected Android or iPhone.

The second key differentiator is compatibility. According to Hubble’s chief product officer, when it launches in late 2015 Hubble expects that (in addition to the Motorola products) it will support WeMo and Wink — two of the most popular connected device brands today. 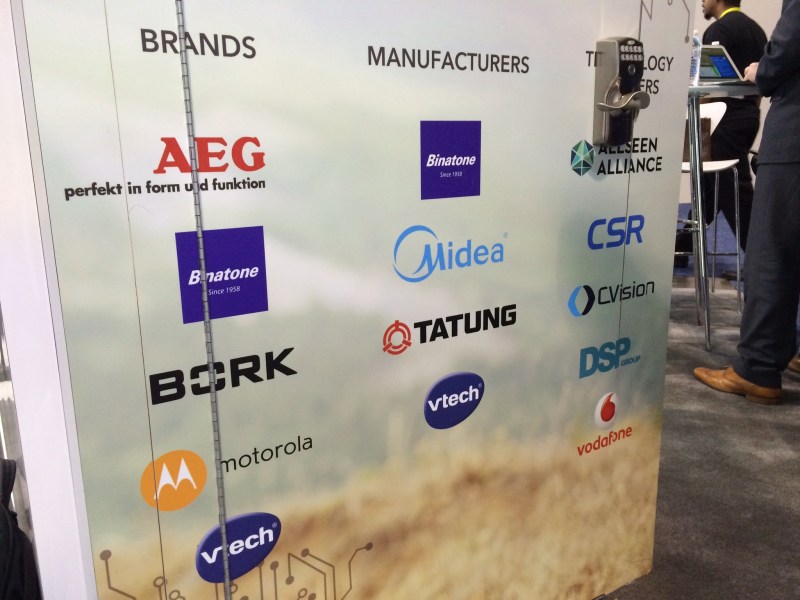 Above: Hubble lists a host of international brands as its partners.

The only issue facing Hubble is that the company’s hub won’t launch until late 2015, which gives other well-known brands the ability to gain market share that Hubble will have a difficult time taking from them.

The lack of an available piece of hardware made it difficult to judge the Hubble piece of Motorola’s strategy, which is why despite the reasonable price points, impressive scale, functionality, and compatibility, Motorola only takes the fourth spot in our top connected home companies at CES. 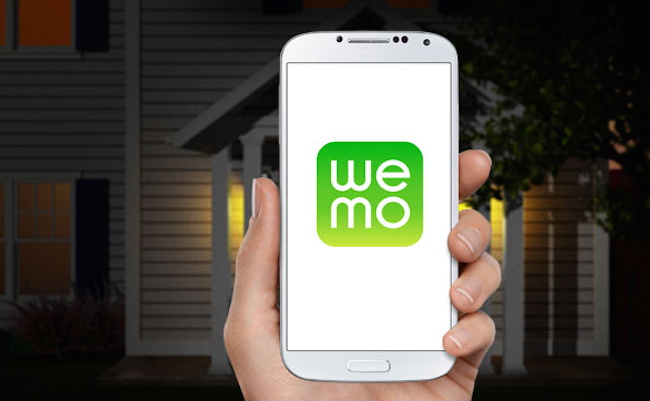 WeMo, Belkin’s connected home brand, is growing by leaps and bounds. Over the past 18 months, WeMo’s product line has moved from 4 items to well over 25. And with IFTTT support, WeMo users can find significant cloud-based applications for their connected home devices.

Unlike so many in the smart home space, WeMo stands out because of the products it’s delivering through relationships with traditional home appliance makers like the Jarden brands. To date, WeMo has delivered Wi-Fi-connected home appliances from Mr. Coffee, Holmes, and Crock-Pot, allowing users to heat and humidify areas of their home, make a cup of coffee, or cook a meal with a little preparation and a lot of flexibility. This functionality is at the heart of the consumer call for a connected home, and those products are already available to consumers.

For CES, Belkin showed off some of its newer fare. Not satisfied with taking standard devices online, WeMo announced ZigBee connectivity, which supports key fobs, light bulbs, door sensors, and even a water pressure sensor that alerts its owner of small leaks before they become big ones. For the more technically inclined, WeMo introduced MAKER, a device designed to connect with any low-power DC current-based item in order to bring it online. While technical support is limited, WeMo’s MAKER allows interested users to control sprinklers, garage doors, and other household gadgets.

Despite the growing catalog of devices for the world of WeMo, the system still gives us a little pause. In an attempt to focus on simplicity and reliability, WeMo’s roll-out of new products is more closed than Hubble’s, meaning that if you’re a true smart home fan, it’s unlikely that WeMo can be your only connected home solution — you’ll likely need to purchase items that are part of another app ecosystem.

There’s also the fact that within WeMo’s mobile app, bugs that have been there for months are considered “known issues” and have yet to be resolved.

Still, Belkin’s WeMo is a safe place to enter into the connected home for most consumers. The hardware isn’t the cheapest on the market, but it’s simple to use and very reliable.