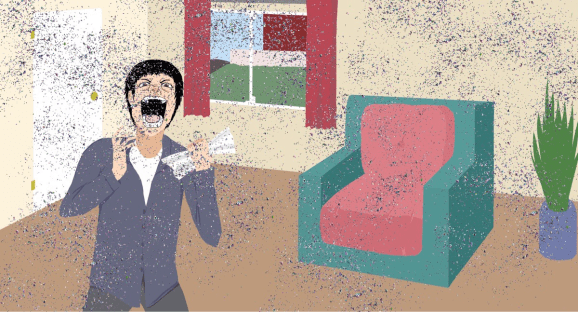 Updated 8:47 a.m. PT: The developer tells us the site has attracted so much traffic that it’s been going down at times today. He’s working on a fix.

In the list of humanity’s greatest achievements, we must now consider adding an Australian e-commerce service called “Ship Your Enemies Glitter.”

The service appears to be real, though even if it’s just a gag, it gets so many things right that, well, who cares? Perhaps collectively we could will this into being.

We at VentureBeat’s crack investigative squad first got wind of this gem via a tipster. (Translation: Founder sent us a press release.)

The summary was too tempting to ignore:

“Glitter as a Service: want to piss off someone you dislike for only $9.99? Let us send them some stupid fucking glitter that is guaranteed to go everywhere.”

Color us intrigued. We read on.

“You know that extremely rare occasion where you receive an envelope in the mail from a distant relative & it contains craft herpes? Glitter to the lay person. Did it get everywhere? Did you scream bloody murder on whatever relative did it? How much do you fucking hate that?” said the company’s founder, who said he wished to remain anonymous. (Really, he did.)

“This is why I created Ship Your Enemies Glitter. Instead of shipping this horrible stuff to friends and family wouldn’t it be better to send it to an enemy? A boss? A bad friend? Maybe even a good friend. Whatever the reasoning I pack an envelope full of that shit, with a lovely letter explaining why they got it. It’s the simplest most effective way to annoy, distract and get back at that asshole who’s in everyone’s life.”

For venture capitalists now considering investing, here are a few other relevant facts.

The site includes a helpful FAQ. Sample question: Why are you so obsessed with glitter? Answer: Go fuck yourself.

And there are loads of testimonials from “users.”

“I bought this for my husband, he opened the mail before work & got it everywhere! He had to change, was late for work & might be getting fired, LOL!” says Grady Chambers.

Eventually, this all leads to a “Buy Now” section which links to a real PayPal account where you can send this person $9.99 in Australian dollars. To be clear, we at VentureBeat are NOT suggesting you do this because, well, c’mon, do you really need an explanation?

Instead, perhaps revel in the fantasy and the thrill of drawing up the mental list of targets you would send glitter IF such a service existed.