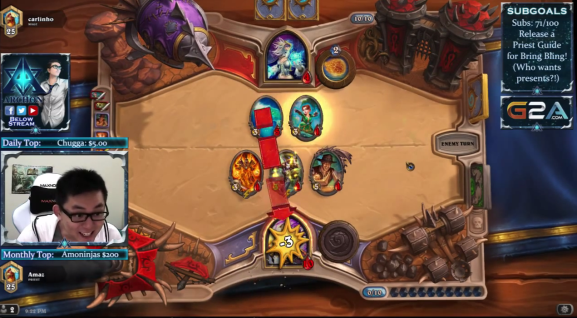 Any given Shattered Sun Cleric.

If you want proof that anyone has a chance to win in publisher Blizzard’s collectible-card game Hearthstone: Heroes of Warcraft, just look to tournament player Amaz’s latest stumble.

Blizzard was performing maintenance on the North American servers this morning, so to continue playing, Jason “Amaz” Chan took his livestream to the Asian servers, where he had to start over at the lowest rank of 25. He put together a new Priest deck with four Legendary cards, which would have a decent chance of taking on anyone at the highest parts of the ladder. His first match pitted him against someone using a Mage deck with all basic cards. Normally, this would mean that Amaz would have a huge advantage … but that didn’t seem to help him.

Watch one of the best players and most popular Hearthstone streamers in the world get embarrassed by a level-25 freeze Mage:

And that’s why they play the game. Normally, you would assume someone running a basic deck wouldn’t stand a chance against a seasoned player with multiple Legendary cards, but it all comes to the draws and how you play.

Of course, this is also evidence that Hearthstone’s ranked play is more a marathon than a sprint. Everyone loses, and long-term success is about building a strong deck that can handle multiple kinds of opponents.

And this certainly doesn’t prove that Amaz isn’t a good player. He can still claim multiple top-five finishes in a number of major Hearthstone tournaments, and he’ll likely go on making a living playing Hearthstone.