Elite: Dangerous picks up the mantle held by the role-playing Souls series of being overly hostile and nearly impenetrable for newcomers.

It harks back the early days of gaming as — even with a 107-page digital manual to consult — playing Elite: Dangerous is often a process of trial and error. It has menus in the user interface that you won’t even spot unless someone points them out to you. Even docking caused me no end of problems for the first few hours, before I realized some stations need you to face the correct way for a successful landing. Above: Outfitting your ship is often a matter of trial and error.

Unlike most modern games, when playing Elite: Dangerous, I’ve always got a pad of paper and a pen in front of me. It’s to help keep track of where I’m flying, what I’m looking to buy or sell, and where I’ve already been. Nothing in its interface or menus really help you do this; even the galaxy map search requires an exact, correctly spelled and formatted name to register a result.

And as with the Souls games, the clock in Elite: Dangerous just keeps on ticking. The action never pauses if you need to check your systems, and I’ve nearly blazed headlong into a sun fiddling with my ship’s weapons systems.

More frustratingly, any missions you take on are time dependent, and time doesn’t stand still when you log out. Three days in, I came back to Elite: Dangerous to find that I’d upset three factions for failing to complete their missions, and I was now a Federation fugitive for failing to pay a fine on time. It wasn’t the best start to a gaming session, but if you have real-life commitments (as we all really should), you’re going to mess up in Elite: Dangerous.

Pretty early on, you’ll realize that beefing up your ship’s feeble starting equipment is essential, but it’s also something of a stab in the dark. Outfitters offer you all manner of exotic equipment, but where it should fit and how it all works is often unclear. As a result, you kit out your ship and just hope everything will still work when you’re in your next dogfight.

I purchased a shield cell bank that I presumed would automatically improve my shield’s regeneration rate, only to find that it’s an ammo-based item with just two uses. Pretty pointless for me, given my propensity to panic in the heat of battle.

Luckily, if you make a mistake, you can sell equipment back to stores at face value, making it possible to build a decent ship through a process of trial and error. Above: Tailing a transport ship.

It’s a contentious decision to make your game depend on an online connection, but Frontier Developments decided it had to with Elite: Dangerous. The developer planned an offline mode at one point, but concerns about players cheating the system when left unchecked, along with the reality of the amount of work it would take to build, put paid to it.

As it stands, if you’re not connected, you can’t play Elite: Dangerous beyond the few training missions. It’s as simple as that.

What’s more, if your connection to the servers goes down, it’s game over. Over the course of seven days, I lost connection around a dozen times. Most of the time, there was no obvious reason at my end — everything else in my connected (real) world was ticking along quite nicely.

On more than one occasion, my connection dropped at an extremely inopportune time — once I’d beaten a particularly “Wanted” ship down to 5 percent health when I suddenly found myself staring at the game menu.

Hopefully, server improvements will cut these disconnects over time, but as it stands, they’re an annoyance. And I’m going to miss playing Elite: Dangerous on those days when my hokey rural Internet connection’s playing up. Above: Mars High look a little like Tracy Island from “Thunderbirds.” I think it’s the palm trees.

Elite: Dangerous was funded partly via Kickstarter, and it’s been through public alpha, beta, and gamma testing periods before launch. But it’s still not finished.

In one way, that’s not great. It has the previously mentioned server disconnects to deal with, the NPC artificial intelligence is sometimes a little unbalanced, and the comms are only working sporadically. It also crashed on me twice in a week, forcing me to manually shut down and reload.

You’ll also find parts that aren’t quite ready to use. I stumbled across some luxuries traders in deep space that I couldn’t actually trade with, and a quick scan of the forums showed that ship-to-ship trading was a beta feature that hasn’t made it back (yet).

The good news is that Frontier Developments still has a large team working on it. In fact, it recently announced that the team has grown to help with continued development, working on both free updates and paid expansions.

In light of this, that “unfinished” tag starts looking more positive, and the ever-evolving nature of the game and its storyline should see further rewards for players who stick around in the Elite universe. 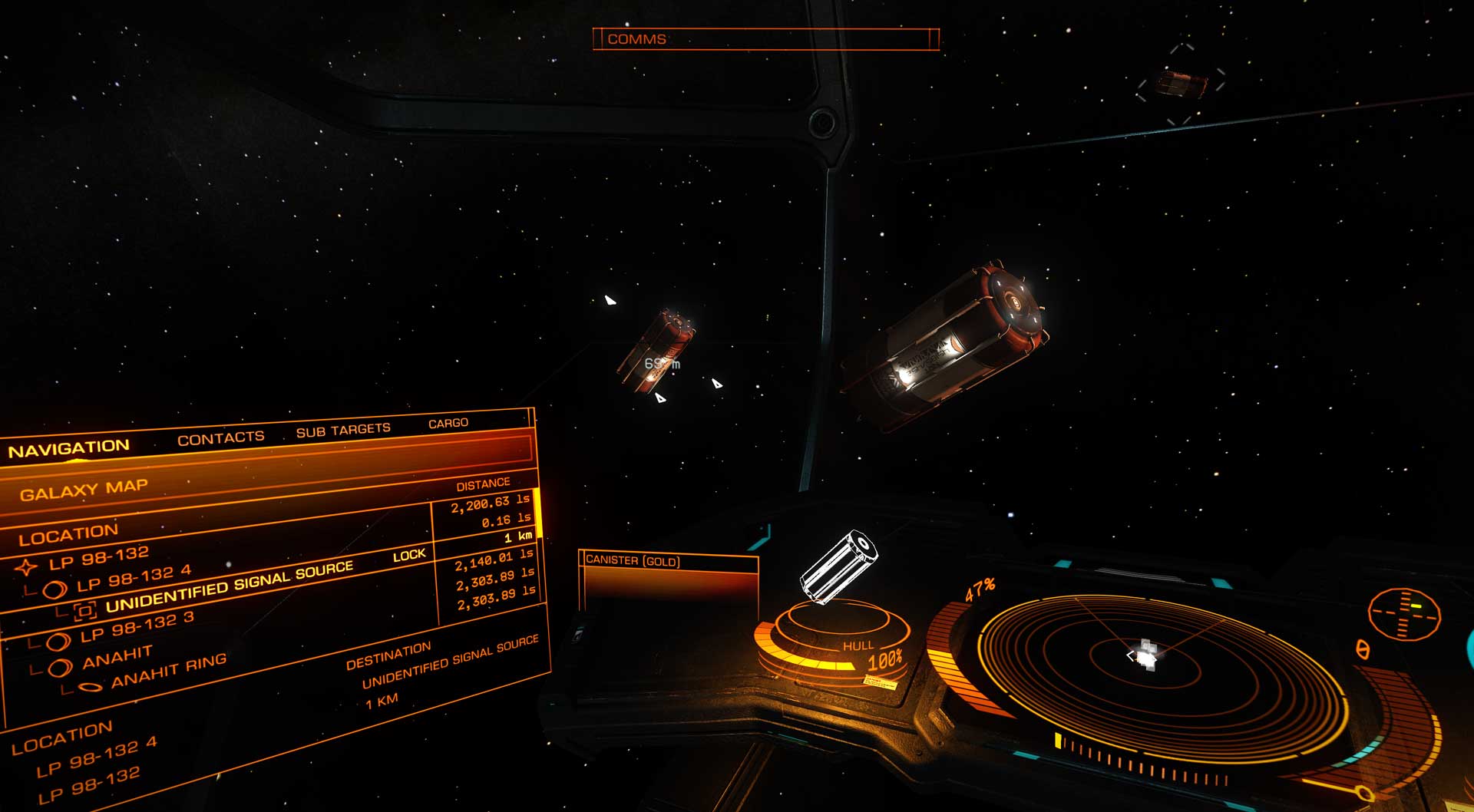 Above: You can use your cargo scoop to gather materials and floating cannisters.

OK, so maybe you don’t actually need a flight stick, but playing Elite: Dangerous with a mouse and keyboard or a gamepad just didn’t cut it for me.

To really feel like you’re in command of a ship, you need to have a throttle in one hand and a stick in the other, and that’s an extra expense.

For the record, I played with a Thrustmaster T-Flight Hotas stick, which retails for around $50. It’s at the budget end of the market, but to my mind it’s a solid and perfectly functional piece of hardware.

Elite: Dangerous is unforgiving, obfuscating, and occasionally dull, but it’s always immersive and beautiful. It offers an incredible universe to explore that, despite occasional graphical repetition, offers the tantalising possibility of wonders yet unseen at the end of each new hyperspace jump.

Having played the original BBC B and Acorn Electron versions 30 years ago, this new game has far exceeded my expectations of what a modern-day Elite could look and play like. It offers enough depth to reward tens or even hundreds of hours of gameplay, and you really can play how you want.

Elite: Dangerous has consumed my waking and sleeping thoughts lately, and the promise of what’s to come fills me with hope for future collaborative adventures in deep space. I just hope my internet connection holds up for the journey.