Nintendo announced that the New 3DS XL is coming to North America next month … but it won’t include a power adapter.

Let’s recap what just happened. Nintendo wants you to spend $200 on the New 3DS XL, which debuts Feb. 13. Spending that cash gets you a faster processor, better 3D optics, and a right analog nub. But that $200 does not get you a way to charge the system so that you can actually use any of that stuff. During its Nintendo Direct streaming-video show this morning, the publisher told gamers they could use the AC adapter from a previous 3DS system or they could buy one separately. 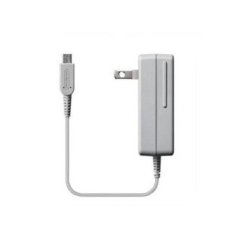 Above: Nintendo wants you to buy this separately from the New 3DS XL.

If you’re one of the people who needs to buy a power cord, here’s a tip: Don’t get the one that Nintendo is selling.

A New 3DS XL-compatible power adapter from Nintendo is going for $8.50 on Amazon. This is the standard gray brick that you plug into the wall. It works, and it’s not that expensive (so why not include it, Nintendo?), but it’s also bulky and behind the times.

Depending on your situation, you are probably better off getting a USB charging cable for the Nintendo 3DS. Third-party peripheral manufacturer Gen is selling a USB charge cable for around $6 on Amazon.

What are the benefits of a USB charging cable?

First, it is far less bulky than the traditional 3DS power brick. Second, you can plug it into any USB port. This means you can charge your New 3DS XL on the go using your computer or one of those power banks that can charge a mobile device. And if you’re like me, you probably have a few extra AC-to-USB wall plugs sitting around from an iPhone, Android, or tablet. If you need to, you can plug your New 3DS XL into the wall using that.

It’s way more convenient, and it’s what Nintendo should ship with its portable systems, anyway.