App analytics and testing firm Applause has announced that it’s expanding its Analytics platform to non-English markets for the first time and will now cover the Apple App Store and Google Play in France, Italy, Germany, and Spain.

Applause has developed a fairly unique form of crowdsourced app testing over the years, one that uses around 100,000 real-world testers from across 200 countries. We most recently covered the company when it closed a $43 million funding round last January, when Applause was still called uTest. The name change came about in May, just as the Boston-based company revealed it was acquiring German crowdtesting company Testhub.

Today’s news signals a big expansion for its Applause Analytics tool, given that it only covered app users in the U.S., U.K., Canada, and Australia before. This move effectively adds millions more apps and reviews from across the E.U.

We talked to 230 developers with 250M users and studied 1.8M apps:
Here are the best mobile app analytics solutions available.

Rather than basing business decisions on testing in contrived environments, Applause Analytics is designed to help companies and developers garner feedback from users “in the wild.” It analyzes tens of millions of reviews and ratings, including sentiment from social media, with each app given an Applause Score from 0 – 100. Applause Analytics then breaks things down into 10 attributes.

Companies that use Applause Analytics choose which of the eight countries they’d like to view from a menu to take a closer look at user sentiment in each market. 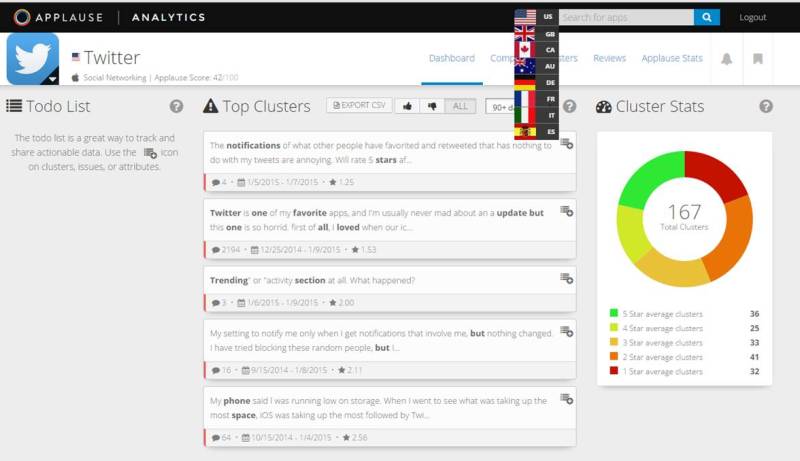 With this launch, Applause says it now crawls around 20 million apps and 370 million app reviews across the iOS and Android realm. But what are the challenges of shifting gears to cover sentiment in non-English language markets?

“Moving into new markets means understanding the intricacies of the cultures, including language,” Heidi Young, Director of Data and Analytics for Applause, tells VentureBeat. “This understanding needs to go beyond using just something like automated translation. That’s why in these countries, we used a combination of expert-sourcing, tapping into our global community, and statistical analysis to ensure that we were representing user sentiment accurately.”

2014 saw a handful of acquisitions from the major players in the mobile realm. Back in December, Microsoft snapped up beta testing startup HockeyApp shortly after Google procured Appurify, an app testing service funded by Google Ventures. Earlier in the year, Apple acquired Burstly, creators of TestFlight — perhaps the best-known app-testing tool.

While pre-launch testing is obviously important, Applause Analytics focuses on the post-launch phase and goes some way towards squashing bugs, improving designs, and catching problems before they escalate.

Europe’s so-called “app economy” was expected to reach $16.5 billion last year, accounting for 19 percent of global app revenues. So it makes sense for Applause to cater more to the E.U. market.