The Simpsons are now available in crude 3D, and it’s not even Halloween.

Microsoft announced today that it will begin selling a new skin pack for Minecraft: Xbox 360 Edition and Xbox One Edition that features characters from the long-running sitcom. This add-on content will enable you to run around your block-building worlds as Homer, Bart, and more than 20 other characters from Springfield. The downloadable content will debut in February for $2. This is the latest expansion for Minecraft on the Xbox, which the publisher acquired for $2.5 billion earlier this year. Minecraft is one of the best-selling and most played games on Xbox 360 and Xbox One. 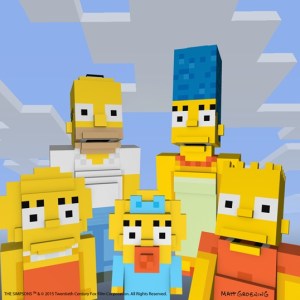 Above: Homer and the family for Minecraft.

While Minecraft debuted on PC in 2009 in an incomplete form — and later launched as a finished product in 2011 — it’s success is in no way limited to the computer. The game has sold millions of copies on PC, smartphone, and console. It finished 2013 as the ninth best-selling physical game despite only having a disc version for Xbox 360 and having a digital version for that console available since 2012.

Those are all reasons that Microsoft plunked down $2.5 billion to buy the rights to the game along with developer Mojang in September. But the sales for Minecraft the game are only part of the equation. Microsoft evangelist Larry “Major Nelson” Hryb used to report the top-played games on Xbox 360, and Minecraft was nearly always in the top five. That streak likely continues, which means Minecraft for Xbox consoles has a huge number of engaged players looking for new content.

To serve that audience, Microsoft has released a number of skin packs for between $2 to $4 that many fans are probably happy to gobble up.

Here’s a list of some of the skin packs the company has previously released for Minecraft on the Xbox Live store:

Making these add-ons probably doesn’t require a lot of effort, since Minecraft has such a simple art style. That means Microsoft can regularly churn these out to keep fans spending a couple bucks on their blocky obsession every few weeks.