The developers of Kiko’s Thinking Time claim that the app’s suite of games will help your preschooler learn.

Kiko Labs released Kiko’s Thinking Time for iPad and iPhone this morning, with free daily training lessons designed for children ages 3-7. Unlimited access to all 10 games, plus a new one each month, costs $8 a month or $50 a year — subscriptions are a rare business model for mobile gaming, a $25 billion industry according to market researcher Newzoo. And it’s one early example of how Zynga’s edtech accelerator co.lab, from the social gaming giants nonprofit and the NewSchools Venture Fund, works.

Kiko Labs stands out for another reason: It also has funding from an SBIR grant from the U.S. Department of Education and angel investors including Guitar Hero cofounder Kai Huang. The company collaborated with neuroscientists from Harvard University and University of California, Berkeley, in creating the app.

Kids help Kiko the Fox search for treasure, meeting cute animals in the fox’s village and helping them with their activities. The games are designed to stretch children’s focus, memory, and other skills. The goal: to help make them more attentive students. The app reports progress to parents so they can see how their kids are progressing.

“Research shows that executive functions, also known as the ‘command center’ of the brain, are critical for children’s academic success and start developing between the ages of 3 and 5,” Grace Wardhana, the cofounder and chief executive of Kiko Labs, said. “Specifically, children with stronger working memory, inhibition and attentional skills show greater gains in tests of early math and literacy. What we’ve done in Kiko’s Thinking Time is designed exercises based on techniques and behaviors that research shows can train these skills and turned them into engaging games.”

For example, a working memory exercise asks children to pay attention to honey drops that are played in a spatial sequence and then repeat it. As they get better, the string of drops gets longer and more challenging.

In another game, children sort objects by shape, then by color. The rules change, challenging players to not only figure out what to do, but also to remember what the current rules are. 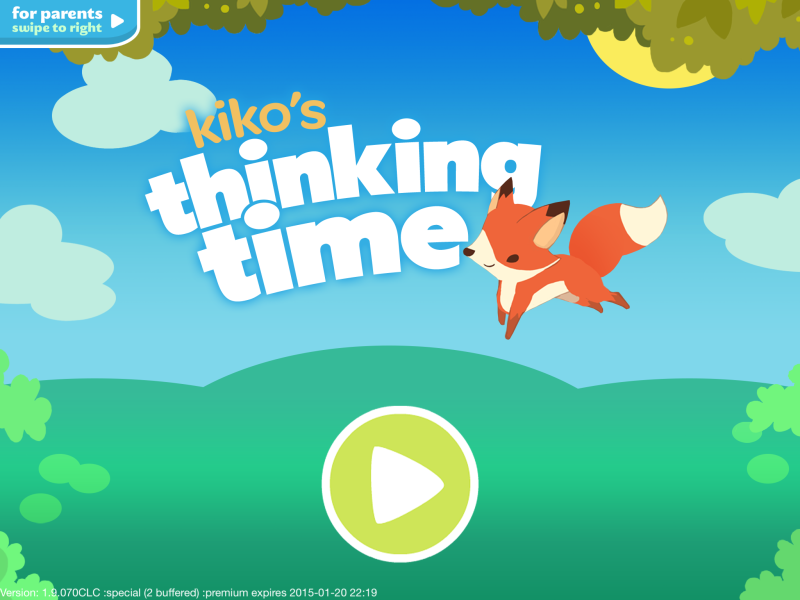 Above: Kiko's Thinking Time is designed for players as young as 3.

Before Kiko Labs, Wardhana was vice president of product and executive producer at Gaia Interactive, a social gaming company.

“Kiko’s Thinking Time gives kids training wheels to practice critical skills like working memory and reasoning,” said Jenny Thomson, a neuroscientist and former associate professor at Harvard. “It does this by providing a structured environment and by designing progression in a rigorous, hierarchical way.”

“With these young learners as our primary audience, touch-based devices are the ideal delivery format for the game,” she said, “as most 3- and 4-year olds are still learning to work with a mouse.”

As the company expands, they expect to release Android and Chromebook-friendly versions, she said.