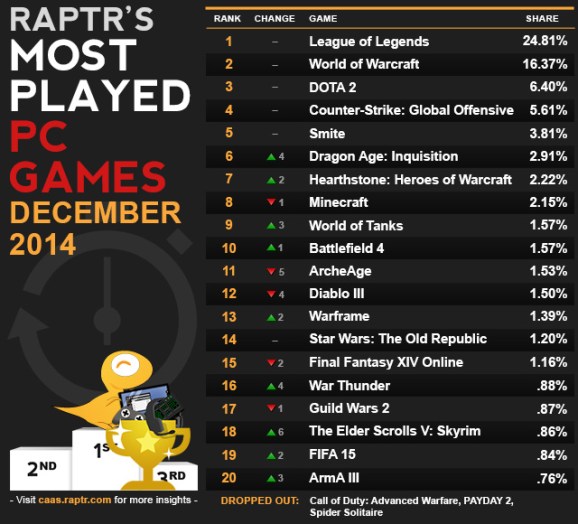 League of Legends remains in a league of its own.

According to the gaming social site Raptr, which gets its data 23 million users in over 100 countries and their percentage of total play time, the multiplayer online battle arena was the most-played PC game in December. World of Warcraft was right behind it, continuing the momentum it gained from November’s launch of its newest expansion, Warlords of Draenor.

Dragon Age: Inquisition rose up four spots. The role-playing game came out in the middle of November, so this was its first full month of availability. Blizzard’s digital card game, Hearthstone: Heroes of Warcraft, rose two spots thanks to the release of its Goblins vs. Gnomes expansion.

League of Legends biggest competitor, Dota 2, was in third place with 6.40 percent of. That’s a good showing, but still significantly behind League of Legend’s 24.81 percent.

Not a single new release appeared on the list, although December is usually a quiet month for new games, especially when compared to November (when publishers release everything that they hope people will purchase as holiday gifts).