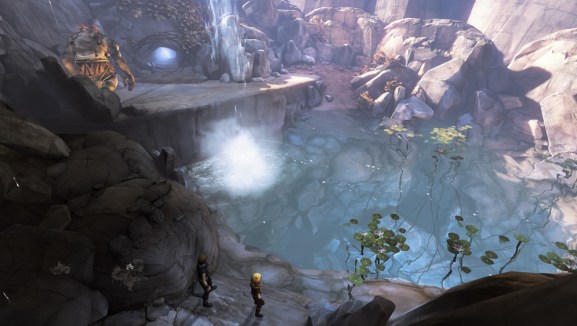 Swedish publisher Starbreeze said Friday it has sold its acclaimed 2013 downloadable game Brothers: A Tale of Sons for $500,000. 505 Games, which published the original, has acquired “full entitlement to the game,” including trademarks and domain names related to it. Brothers is a beautiful game with a great story and creative gameplay, and it made my top 10 list for the best games of 2013.

“With Brothers, we’ve created a strong and critically acclaimed intellectual property, which we now feel can be best nurtured under a new owner,” Klint told Gamespot.

Starbreeze, meanwhile, will focus on building its other franchises, such as the cops-and-robbers shooter series Payday.

Swedish filmmaker Josef Fares created Brothers with the help of the internal development team at Starbreeze. He canceled his own movie to work on it, and that gamble paid off.

Fares has started his own game development studio, Hazelight, which showed a trailer for its first title during The Game Awards in December.

Ian Howe, president of 505 Games, told GameSpot that “Brothers: A Tale of Two Sons is a remarkable game, one of the most affecting games of the last generation and one of which 505 Games has been very proud to be associated. This acquisition reflects 505 Games’ stated strategy of owning and controlling its own IP, and, moreover, IP that can contribute something meaningful to the world of interactive entertainment.”