Publishers are figuring out that they can get more attention for their downloadable content if they sell it as a standalone product. That’s what publisher Deep Silver is attempting with Saints Row: Gat Out of Hell, and it’s time to find out if this model works.

It’s a $20 game that follows the story of a pair of Saints Row gang members traveling to the literal hell to save their boss (who is also the President of the United States and the character you played as in the previous Saints Row games). While that sets up a different world and story than its most recent predecessor, Gat Out of Hell shares a core with Saints Row IV. So the question I came into this game with was simple: Did developer Volition make enough game for Gat Out of Hell to stand on its own?

The musical numbers and writing

Oh, I forgot to mention something! Saints Row: Gat Out of Hell is a musical. Johnny Gat, Satan, and the rest of the cast belt out tunes that are both catchy and funny. About an hour into the game, it took about five minutes to deliver its first original song, and it was the first time I felt zero impatience with a cutscene.

The voice actors do a good job of not trying too hard while simultaneously treating the singing with respect. That’s a tough line to walk, but it is a necessary one to keep you genuinely enthusiastic about the music without cringing.

Daniel Dae Kim (Hawaii Five-O, Lost), who does the voice for Gat, is especially good at this. He sounds like he could probably sing a lot better than he does in this game, but he does it in Gat’s growling gangster voice without scoffing at the fact that he is singing.

I’m not sure gaming has room for more Broadway-style musicals, but I’m glad I got to experience it in this. And I’m not surprised it was Volition and Saints Row that did it.

Gat Out of Hell also has the same high-quality and hilarious writing that made the previous two Saints Row games so much fun. A lot of this comes through in cutscenes, but you also get a taste of it from audio diaries and in-game chatter.

It doesn’t hurt that Volition picked some fun citizens of hell tow work with like William Shakespeare and Vlad the Impaler.

At the start of Saints Row IV, you were just a guy running around and stealing cars. By the end, you were a superhero who could jump over buildings.

Thankfully, Gat Out of Hell doesn’t force you to go through that same progression all over again. It starts you out, almost immediately, with the ability to sprint and fly. Since you’re in hell and not a Matrix ripoff, you even get sweet demon wings.

You can still improve your skills and unlock new abilities, so you have a progression — but it you start off powerful enough to get around the vast city without ever having to get into a car (except for once at the beginning).

It is flimsy and cheap

Open-world games always have some jankiness to them. Releases like The Elder Scrolls IV: Oblivion, Grand Theft Auto V, and Assassin’s Creed: Unity are all massive and filled with broken crap. They have glaring seams where the developers duct-taped the world together. That’s a part of the genre.

But Gat Out of Hell is cheap even compared to what many expect of an open world.

Some examples include the camera getting stuck behind objects during melee attacks about half the time. Those same melee animations often have terrible collision detection where you and your target are separately going through the attack while 10 feet apart. And it is also pauses and unpauses itself at random.

In addition to the technical hitches, Gat Out of Hell is just missing elements that made Saints Row: The Third and Saints Row IV so magical. The great cast from the latter misses out on the bulk of the action. You don’t get a ton of great character-to-character interaction. The smaller moments, like you and Pierce doing a duet to Sublime’s “What I Got,” are mostly absent. And a lot of the story is told through still pictures that honestly look like concept art.

I get it. Gat Out of Hell is only $20, and most of the budget went to producing the music — and that really works. But it stinks that the songs come at the expense of everything else.

Gat Out of Hell can stand on its own. Yes, it is undercooked, and it has problems, but the core mechanics and gameplay still work.

Those issues should not keep any fan of the series away from Johnny Gat singing his guts out about struggling to piss off Satan and loving murder sprees.

Saints Row: Gat Out of Hell will release Jan. 20 for Xbox and PlayStation consoles as well as PC. Publisher Deep Silver provided GamesBeat with a PS4 download code of the game for the purposes of this review. 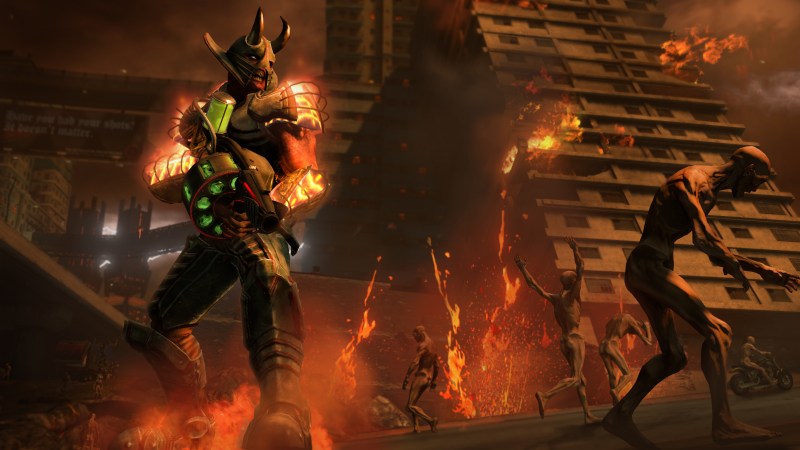 Above: Instead of gang members and the police, you'll have to fight off the denizens of hell.