Everybody loves robots, but most people only have one, if even that. But a Chinese startup thinks you should be able to have as many as you want — all in a single product.

That’s the premise behind CellRobot, a customizable, reconfigurable robot project that is expected to launch a Kickstarter campaign next week, looking to raise $250,000.

CellRobot comes as a collection of small, spherical, modular robot cells, which, when combined in different ways, make individual robots that can do any of a wide variety of different tasks.

“Just like the cells in our bodies which work together to create life and function, [cells] serve as the essential building blocks for each CellRobot,” Beijing-based Cell Robotics wrote on its Kickstarter campaign page. “Once connected, they can perform any function, and be manipulated into an endless variety of interesting and easy-to-assemble shapes.”

The idea is simple: By connecting multiple cells together — including one energy cell that powers the complete robot — you can craft a robot capable of things such as driving around like a vehicle, reaching to turn off an alarm clock, or slithering across the ground like a snake. It can even play piano. “It can be your intelligent lamp, flexible machine arm, a light monster in parties, an interesting pet dog, a fast scout car, a special aircraft, and so on,” Cell Robotics claimed.

The system is controlled by the CellRobot mobile app.

In teaching mode, the system can suggest existing designs, with the app giving building instructions. Alternatively, in self-controlling mode, owners can create their own brand-new designs, using the app to configure the speed, rotation, and orientation of the various cells. Those new creations can then be shared to other CellRobot users.

At the core of the CellRobot is the system’s Heart, a single cell that is the power and brains behind each individual robot creation. The user incorporates a single heart into a set of cells, allowing the robot to move and behave as designed. 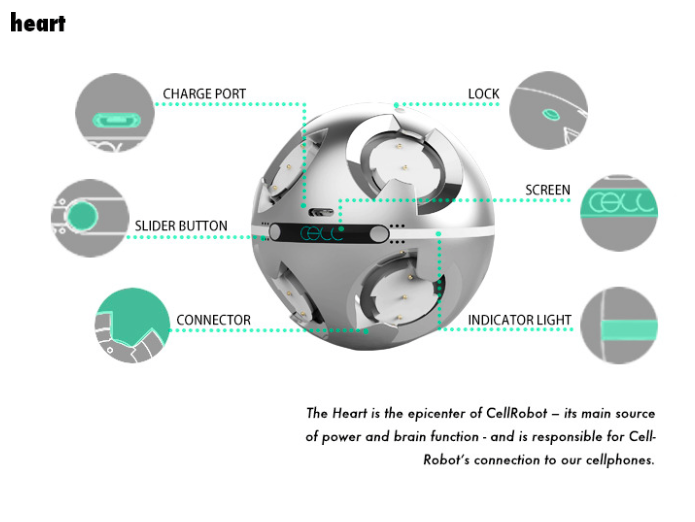 Above: At the core of the Cell Robotics system is its Heart, a cell that provides power and brain function.

The CellRobot won’t be the only customizable robot on the market. Others include Sphero, Tinkerbots, and even Lego’s programmable Mindstorms system. There are also other personal robots available today, or coming soon — things like the Jibo, the Personal Robot, and Softbank’s Pepper. But Cell Robotics clearly hopes its approach will set it apart, offering design sophistication, a high degree of customization, and usability for novices or those with more experience.

Of course, for Cell Robotics to succeed, it needs funding, and that appears to be up to the Kickstarter community. The company’s $250,000 goal is ambitious, but crowdfunders have happily helped others reach, and surpass, their goals, so Cell Robotics has reason to be optimistic.