Eric Schiermeyer, the cofounder of Zynga and the analytics expert behind its success, has launched a new iOS game dubbed Greedy Goblins in an effort to pioneer the new genre of “strategic runner” on mobile.

This is the first game from Schiermeyer’s newest studio, Luminary, a team with just six developers. That the startup was able to create a brand-new product from the ground up in just seven months is pretty remarkable, given the heavy investment that much larger companies are putting into their efforts now. Schiermeyer believes in the power of small teams, even though he helped create Zynga, which grew to more than 3,000 employees at its peak and is now having trouble competing in the $25 billion mobile-gaming market. 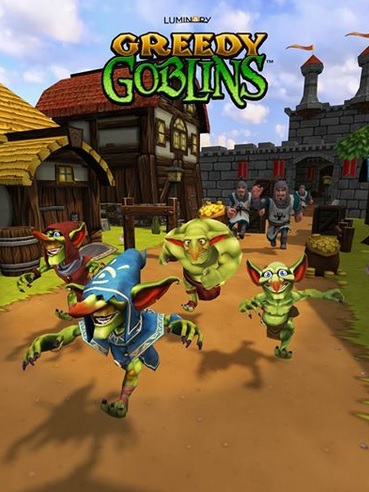 Greedy Goblins is a mashup of an endless runner combined with strategy games, where the goal is to send your goblin racing into a rival fortress and then steal as much gold as possible. Players can put obstructions in the goblins’ way and strike back with revenge attacks. Players must plan for defense and offense, and both become progressively more difficult over time. While other games like Temple Run are “infinite runners,” or “endless runners,” Schiermeyer thinks of Greedy Goblins as a “finite runner,” or a “strategic runner.”

Schiermeyer believes his game is off to a good start, and he hopes to be able to boost it in the coming days in part because of his own expertise in analytics and his attempt to marry that discipline with good game design.

Back in May, I interviewed Schiermeyer during a walk along the coastal trail in Half Moon Bay, Calif., where he frequently conducts his meetings. And I recently caught up with him again.

“We’re just at the beginning,” said Schiermeyer. “We’re really excited. It’s the moment where we’ll see if players will like it. So far, we’re really pleased with the reception the players have given us. There’s always room for improvement, but when you are creating a new category of games, there’s a bit of fear about that.”

The company has designed a couple of other units, as well as a set of obstacles for those units to defeat. And the team will add future settings beyond the current village to castles and more. Players will have to set up more elaborate defenses and consider whether to purchase premium obstacles. Over time, Greedy Goblins will add more social interaction.

When he was starting out, Schiermeyer said he faced a lot of skepticism about doing a new kind of game.

“I got the feeling potential investors would have been happy with a Clash of Clans clone,” Schiermeyer said.

It was on the windy cliffs of Half Moon Bay (and on beaches in Encinitas, Calif.) where Schiermeyer reflected on his experience at Zynga and decided that he wasn’t quite done with his contributions to games, technology, and building companies in Silicon Valley. And this time, he wants to create a company that is as significant as Zynga in the way that it is run but is also much smaller.

Schiermeyer, who was a founder of Intermix (which led to MySpace), was at the start of Zynga with cofounder Mark Pincus, the longtime chief executive who grew the company to more than 3,500 employees and a billion dollars in revenue. Pincus missed the transition to mobile in a big way, the company hit the skids, and he brought in new CEO Don Mattrick (the former head of Xbox at Microsoft) to turn things around. But for a number of years, Zynga pioneered its path in social games and had its competitors on the run.

When Zynga got to be huge, Schiermeyer decided he wasn’t having as much fun. He was frustrated with internal politics and working so hard to achieve results that didn’t satisfy. He left Zynga a few years ago and decompressed.

He started Luminary in August 2013 with David Glenn (who has since left), a former Zynga employee and former Blizzard Entertainment developer who was part of the team that built the successful Diablo II game; Amir Ebrahimi, a veteran of companies including Naughty Dog (the Uncharted series for PlayStation), Activision, and Unity Technologies; and Marco Rizzo, a financial expert who also makes games.

Schiermeyer saw what happened at Zynga with stock options and wanted to get away from the traditional incentives that drive startups to become bigger and bigger at all costs. He wants his new studio to stay small and function with large-scale profit-sharing.

Rather than concentrate the rewards among just the founders, Schiermeyer wants everybody to have significant profit-sharing checks on a regular basis. If it has no profits to share, so be it. And when the team decide to hire someone, they will realize that the addition of one person will reduce the size of their profit-sharing and perhaps think twice about it. And they won’t have to wait for years to see a potential payoff.

Schiermeyer doesn’t want his employees working so hard that they become sick or unhealthy. At Zynga, he argued for benefits like yoga classes and massages. He decided that a team with “good kung fu can kick ass” and deliver a game that makes it to the top-grossing mobile rankings.

For his next task, Schiermeyer will be raising the first significant round of funding for the team.

“We did this with a small team, but now it’s time to grow,” Schiermeyer said.